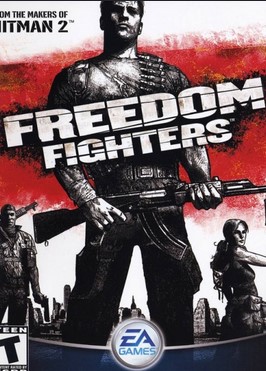 Freedom Fighters is a 2003 third-person shooter video game for the PlayStation 2, GameCube, Xbox and Microsoft Windows. It was developed by IO Interactive and published by Electronic Arts.

The game is set in an alternate history where the Soviet Union has invaded and occupied New York City. The player takes the role of Christopher Stone, a plumber turned resistance movement leader, fighting against the invaders.

Freedom Fighters is a third-person shooter, in which the player navigates through the streets of New York with a controllable squad of team mates while fighting the occupying Soviet forces. The player gains charisma points by performing various deeds, such as capturing a base or destroying enemy supplies. The more charisma gained, the more squad mates the character can recruit, up to a maximum of twelve. The player can direct recruits by giving them simple orders such as "follow," "attack," and "defend."

The console versions' multiplayer revolves around securing flags and bunkers. The flag is usually in the center of the map. Bunkers are positioned around the map, and spawn either Soviet soldiers or American freedom fighters. A game can host up to four players via split-screen who may choose between the Soviet and American sides. Each side has a different set of weapons which the players can switch during battle. The players' charisma meters are set to eight, so each player can have a maximum of eight soldiers under their command; however, if it is a four-player battle, each player can control a maximum of four soldiers. The PC version does not support multiplayer.

The Soviet Union became a world superpower by dropping the first atomic bomb on Berlin, ending World War II, and propping up communist states throughout the globe which begin to surround the US in the present day. New York plumbing brothers Chris and Troy Stone travel to meet with their next client, an activist named Isabella Angelina, only to find her apartment abandoned. The Soviet Union launches a surprise invasion of New York City and suddenly Soviet soldiers, led by General Vasilij Tatarin, seize Troy. Amidst the attack, Chris escapes to the streets, encountering a man named Mr. Jones and resistance member Phil Bagzton. After rescuing Isabella from a police station and Troy from a post office, the group retreats to the sewers and sets up a base of operations as New York is lost, with the media now being controlled by the Soviet Union.

Months later, Chris, Phil, and Isabella sabotage key Soviet facilities and reclaim areas within the city, building up a resistance group of New York citizens and disillusioned Soviet soldiers. Chris becomes known as the "Freedom Phantom" within the Soviet-controlled media network, SAFN. Troy is captured by Soviet troops and tortured for information. Forced into issuing a public statement aimed at the resistance to cease their actions, he breaks from the prepared text and urges Chris to continue fighting. In response, General Tatarin has Troy taken to Fort Jay and executes him personally. Mr. Jones suggests assassinating Tatarin in retaliation. Chris succeeds, but returns to find Isabella missing and the resistance base occupied by the Soviet Army. The operation was orchestrated by Mr. Jones who reveals himself to be KGB agent Colonel Bulba. Chris escapes with Phil and others to a new underground area while SAFN reports on the death of Tatarin, Colonel Bulba's promotion to General, and the end of the resistance in New York.

During the winter, Chris leads the resistance deeper into occupied New York, culminating with a major raid on SAFN Studios. Chris uses the station to send a broadcast encouraging the city and beyond to rise up and bring an end to the Soviet occupation. A final assault on Governors Island, consisting of massed resistance forces, is planned. After capturing Fort Jay and rescuing Isabella, New York is liberated for the time being as Chris and the group solemnly celebrate their victory. Chris knows the Soviets will not give up the occupied United States easily, but resolves to fight on as long as is necessary.

In 2002, EA Games officially announced Freedom: The Battle for Liberty Island, which would later be renamed Freedom Fighters, at the Electronic Entertainment Expo. The concept for the game originally involved a turn-based strategic mode as a major element of gameplay. Developed using the Glacier 3D engine, Freedom Fighters was released in the U.S. on October 1, 2003, a full week after the UK release. An EA spokesperson stated that retailers in the U.S. had requested the delay. The game is one of the few developed by IO Interactive that was not published by Eidos Interactive.