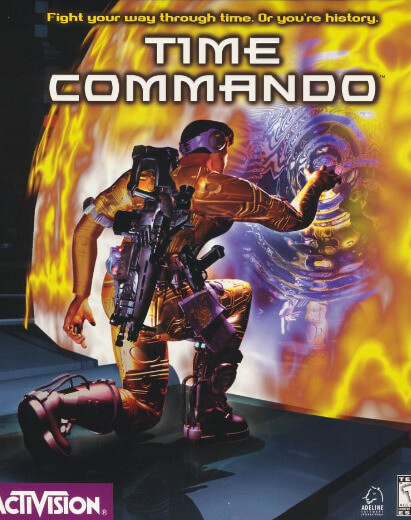 Time Commando is an action-adventure computer and video game developed by Adeline Software and published by Electronic Arts in Europe, Activision in America (United States and Brazil), and Virgin Interactive (PlayStation version) and Acclaim Entertainment (Sega Saturn version) in Japan.

Time Commando was re-released for modern computer systems on 6 January 2012 by GOG.com.

The game takes place in the near future, in the year 2020. At the Historical Tactical Center, the military, with the help of a private corporation has created a computer capable of simulating any form of combat from any point in history. However, a programmer from a rival corporation infects the system with a "Predator Virus" that creates a time-distortion vortex, which threatens to swallow the world if it is not destroyed. The player controls Stanley Opar, a S.A.V.E. (Special Action for Virus Elimination) operative at the facility who enters the vortex to try and stop the virus.

In each level, Stanley collects various weapons exclusive to the time period. Stanley has a small life bar that grows larger when the player picks up life power-ups. Along the same lines, Stanley has multiple lives. As the player plays through a level, a time bar, which counts down time until the virus completely takes over and the player dies, slowly fills. This bar can be emptied by depositing computer chips collected throughout the levels in various "orb pools," which resemble the vortex Stanley first entered.

The four reviewers of Electronic Gaming Monthly liked the game's concept and the weapons the player can use in each era, but criticized the animations and the difficulty in hitting enemies due to the poor controls and full motion video scrolling. Crispin Boyer and Sushi-X in particular remarked that the game is mainly enjoyable due to the unintentionally humorous animations. GameSpot also mentioned problems with the controls and animation but were otherwise more positive, summarizing that "Time Commando's stunning 3-D graphics and innovative gameplay bring action and adventure on the Playstation to dizzying heights." Atomic Dawg of GamePro actually praised the controls, but agreed that "the overall visual impact is diminished by pokey, lame-looking basic moves." His main criticism was how slowly the game moves whenever the player is not in a fight, and he concluded Time Commando to be an essentially good game that players would need an unusually high amount of patience to enjoy. A Next Generation critic said in a brief review that "It looks good, but it's repetitive, the control is twitchy, and it never quite takes off."