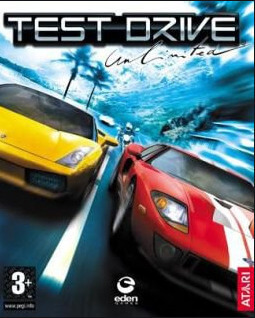 Test Drive Unlimited is an open world racing video game developed by Eden Games published by Atari for Xbox 360 and Microsoft Windows. Atari Melbourne House developed the PlayStation 2 and PlayStation Portable versions. The game features over 125 licensed sports cars and motorcycles and a terrain is modeled after the Hawaiian island of Oʻahu that features some 1,000 miles (1,600 km) of roads and highways.

In the world of Test Drive Unlimited, the player is able to drive both on-road and off-road in free-roam mode, challenging any real life racers they encounter. The roads are modeled after satellite images of the island of Oʻahu. The terrain differs from rainforest and mountains to sandy beaches and Hawaiʻi's capital city, Honolulu. It is worth noting however, that other built-up areas on the island are not represented. It is possible to drive on small islands outside of the main island. The Xbox 360 version has supported steering wheel controllers since launch. Following the third free update, Test Drive Unlimited supports force feedback wheel controllers such as Microsoft's Xbox 360 Wireless Racing Wheel.

Although advertising material for the game suggests it to be an exact depiction of the Hawaiian island, numerous government buildings (such as those on Pearl Harbor, Camp H. M. Smith, Hickam Air Force Base), commercial buildings (Ala Moana Center, the convention center, the entire commercial strip in Pearl City and the Pearlridge Center), and notable landmarks (statue of King Kamehameha I, USS Missouri, etc.) are not present in the game. Many roads and highways are also missing or placed far from their real-life counterparts. The ships docked in Pearl Harbor are also in very low detail and do not represent any active or retired USN vessel at all.

Success in challenges is rewarded with in-game money, or in the Hitchhiker and Top Model challenges, coupons. Using these coupons, the player can buy clothing for their character at the many branded clothes shops on the island. Money earned may be spent on buying new vehicles, renting cars, upgrading cars and buying houses. Players can acquire sports cars from various manufacturers, including a Ferrari 575M Maranello, the AC Cobra 289, the Maserati 3500 GT and the Pontiac Firebird. The megapack adds more than 45 more cars, including the Efijy Concept, the Ferrari 512 TR and the Nissan Skyline GT-R, and an extra motorcycle.

411Mania gave the Xbox 360 version a score of 8.6 out of 10 and stated, "Even if you own a next-gen racing game, this is a title that you MUST try out. This is such an open ended game that never actually ends ala (sic) World of Warcraft and feeling like you’re a part of the Island with your homes, vehicles and club is too much of a cool thing to pass up." The Sydney Morning Herald gave the same version a score of four stars out of five and called it "a car aficionado's paradise and a novel concept in driving games. Unlimited's online world is certain to be mimicked." The Times also gave it four stars out of five and stated that it "comes closer than most games to re-creating the freedom of real life." In Japan, where the Xbox 360 version was ported and published by Microsoft on 26 April 2007, both Famitsu and Famitsu Xbox 360 gave it a score of 34 out of 40.