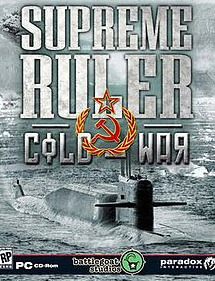 Supreme Ruler: Cold War was developed by BattleGoat Studios and was announced August 19, 2010 by Paradox Interactive at the 2010 Gamescom video gaming convention held in Cologne, Germany and released on July 19, 2011. It is set during the Cold War Era from the end of World War II to the early 1990s. The main Campaign allows the player to be the head of either the U.S. or the USSR, while the Sandbox game mode can be played from any nation's point of view.

Play as the United States or Soviet Union in Campaign Mode

Use Diplomacy, Trade and Espionage to influence the policies of other nations

Research new Technologies to give your nation an edge

Grow and Modernize your Economy

Control Military production and deployment, or let your Ministers take care of the details

And when Diplomacy Fails… Sophisticated Real-Time Strategic and Tactical Control of your Military Forces!

Up to 16 players in Multiplayer over local network or Internet