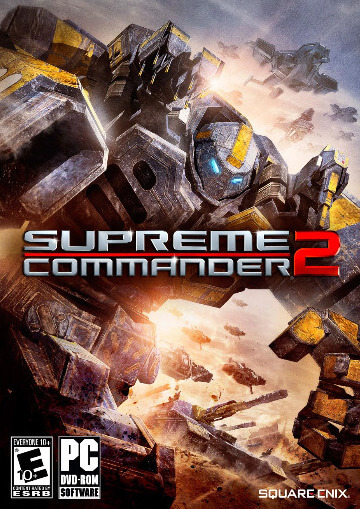 Supreme Commander 2 is a real-time strategy (RTS) video game developed by Gas Powered Games and published by Square Enix. It is a sequel to Supreme Commander. A Windows-only demo was initially released via Steam on February 24, 2010, with the full game released on March 2, 2010.

In both the skirmish and multiplayer modes, players start out with an Armored Command Unit (ACU), which is a large, powerful, construction-capable unit, as their avatar on the battlefield. They build mass extractors and power generators, which produce mass and energy, along with research facilities that produce research points faster. Players can also build land, air, and sea factories that produce land, air, and sea units, respectively. Players may also build add-on structures, expanding the capabilities of existing factories. Some buildings and units are more advanced than others and as players' bases and research levels expand, so does the quality of their units. Research points can be spent on faction-specific tech trees to add bonuses, abilities and upgrades, and to unlock more-advanced units and buildings. The final result of this development is the unlocking of experimental units, which are large, research-unlocked units and buildings with significantly more power than other units and buildings. Experimental units can be produced from experimental gantries (buildings with the sole purpose of building experimental units) or built by engineers. The ultimate aim of the game is to destroy the opponents' ACUs.

In the heavily-scripted campaign mode, the player is provided with a base at the start of the game, and faces an already-established opponent. In order to finish the level, the player has to complete certain objectives, for example "destroy the enemy's experimental unit". As the campaign progresses, the player is able to unlock a wider range of units, the missions become more challenging, and the enemy grows stronger.

In an interview with MacGamer, an online magazine dedicated to gaming on Mac PCs, game designer Chris Taylor had this to say about Supreme Commander 2 and its spiritual link to his previous Total Annihilation series: "I think they are indeed the spiritual successors, because of the way I approach RTS Real-time strategy design. I don’t like a lot of rules, and I like big, open worlds. Some might say the economy systems play a role in that, but I think it goes much deeper than that. I think many folks will see our upcoming Kings and Castles game as a continuing extension of those previous RTS titles."

The game is AMD Eyefinity validated.

The story starts with the newly elected President's assassination, causing the breakup of the coalition formed during the expansion of the first game.

The first campaign (dedicated to the UEF or United Earth Federation) follows Dominic Maddox, a UEF officer who is married to an Illuminate. Maddox fights off a rogue Cybran who is later revealed to be William Gauge until the UEF Commander he serves declared that all Illuminate are terrorists and orders him on a mission to "round up" the Illuminate from his home city. Maddox refuses, goes rogue, and decides to go on his own campaign to remove his old commanding officer from power. Immediately following the defeat of the UEF Commander, he discovers a portal that leads to Seraphim VII, unlocking the second campaign.

The second campaign (dedicated to the Illuminate) follows Commander Thalia Kael as she fights under the commands of a group known as the Royal Guardians to "restore the Illuminate to their former glory" before turning against her former comrades and realizing her mistake and unwittingly aiding Gauge's plans.

The Cybran campaign follows Ivan Brackman (an experimental genetic composite clone of Dr. Brackman and Elite Commander Dostya), an old roommate of Maddox, who fights under the direction of Dr. Brackman (whom Ivan refers to as "father" while attempting to help his friends) against Gauge and his allies.

The final battle takes place on the surface of an ancient planetary terraformer called Shiva Prime. After the battle, Ivan comes to a realisation about Shiva Prime and does not conform to his father's will.

On February 24, 2010, a demo of Supreme Commander 2 was released on the Steam digital distribution service. The demo includes two tutorial levels and two campaign levels all played as the UEF faction, but does not include skirmish or multiplayer modes. The single player includes two missions, which were picked to show the more advanced portion of the game.

On initial release, the game received mixed critical reception. While many critics praised the game as a standalone title, it was generally perceived to be a simplified version of the original game. Alec Meer, reviewing for Eurogamer, predicted that the game would "leave much of its intended fanbase cold," and Tom Francis, writing for PC Gamer UK, later summarized Supreme Commander 2 as "a game that solved the accessibility issues of the first game, bought primarily by people who didn’t want them solved." On Metacritic, which aggregates a wide range of reviews and assigns an average score, the game received 77 out of 100 based on 54 reviews.

After release, the game received several major updates and changes. For example, one update released in October 2010 reworked the way construction was paid for, as described above. The changes were widely praised and the game was considered by critics to have been improved since release. For example, Tom Francis, who gave the game a score of 85 out of 100 on release, said in October 2010 that had he been reviewing it in October 2010, he would have given it a 90. PC Gamer UK named Supreme Commander 2 their 2010 "Co-op Game Of The Year".