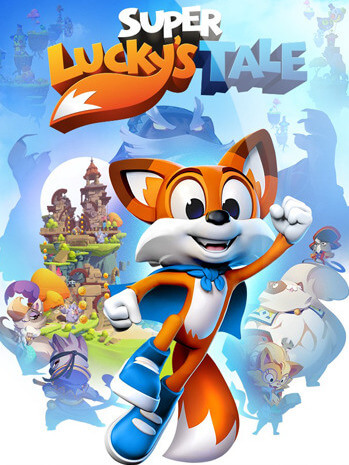 Super Lucky's Tale is a 3D platformer video game developed by Playful Corp. and published by Microsoft Studios for Windows 10 and Xbox One. It is the sequel to Lucky's Tale, a virtual reality 3D platformer for the Oculus Rift. The game was released as a launch title for the Xbox One X on November 7, 2017. The game is featured as part of the Play Anywhere program. It was announced during the Xbox presentation at E3 2017. In March 2018, the game became part of Xbox Game Pass.

An expanded version of the game titled New Super Lucky's Tale for Nintendo Switch was revealed on the Nintendo Direct livestream at E3 2019 on June 11, 2019 and released on November 8th, 2019.

Super Lucky’s Tale follows Lucky, a curious and brave fox on a quest to find his inner strength and help his sister protect the Book of Ages, inside of which exist entire worlds and characters. The game's antagonist is a cat named Jinx, a mysterious villain who is trying to steal the Book of Ages for his own nefarious purposes. Along the way, Lucky encounters a supporting cast of friends and adversaries. Lucky must confront the Kitty Litter, Jinx's mischievous kids. Lucky also meets friends and allies along the way, including misplaced Yetis, Kookie Spookies, a village of farming worms, and other colorful characters, all of whom live inside the Book of Ages and who, without Lucky's help, will fall prey to Jinx and the Kitty Litter's evil machinations.

Super Lucky's Tale's gameplay has been described as reminiscent of 90's-era 3D platformers such as Banjo-Kazooie, Crash Bandicoot and Super Mario 64. Each of the game's four worlds is presented with its own hub, where each individual level can be accessed. The hubs are levels themselves, with coins to collect and some basic platforming required to reach new areas. Each hub has around five main levels, and a number of additional puzzles to complete. The goal of each of these levels is to collect clovers, which enable Lucky to take back control of the Book of Ages from Jinx. Each level has four clovers to find — one for completing the level, one for collecting 300 coins, one for finding the five letters that spell "LUCKY", and one 'secret' clover, which is usually in a hidden area of the level, or by completing a short time challenge.

The levels themselves offer a variety of platforming challenges. Some are 3D arenas with non-linear progression. Others feature 2D side-scrolling. There are also several mini-levels in each world, including Sokoban-style puzzles and mazes where Lucky is trapped in a marble and has to be guided to an exit. Finally, there are several boss fights featuring the Kitty Litter and Jinx.

Chris Carter from Destructoid gave the game a 7 out of 10 calling it "a clean, responsive platformer" and noted its controls are "an achievement given how sloppy some mechanics are in recent mascot platformers." Kallie Plagge from GameSpot noted its limited camera controls are frustrating and added, "It's easy to imagine how Super Lucky's Tale would be the highlight of a younger kid's weekend, but it has little to offer anyone looking for an enjoyably challenging 3D platformer."

In his review for Nintendo Enthusiast, Brett Medlock concluded that "from beginning to end, New Super Lucky’s Tale is a much more streamlined experience than the original. Any qualms with the original game have been rectified in this reimagined edition for Nintendo Switch. It’s a fun-filled experience that shouldn’t go unplayed by 3D platformer fans."

Chris Scullion from Nintendo Life summarised that New Super Lucky’s Tale is a "solid port of an underrated platformer with a greatly improved camera. It's a little on the short side and may not provide much of a challenge to more hardened gamers – and if you already own it on Xbox One there really isn't enough 'new' here to warrant a second purchase – but what makes it worth a look is its uncanny ability to make you smile, and this is something that can't be overlooked, especially in modern times."

18 Wheels of Steel: Across America
USERS COMMENTS
it only says start activation and skip activation,none of them work to start the game there is no cancel