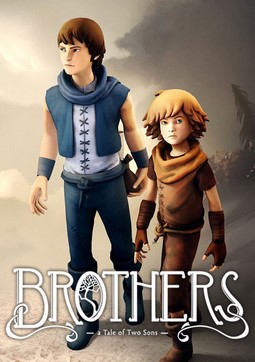 Brothers: A Tale of Two Sons is an adventure game developed by Starbreeze Studios and published by 505 Games for Xbox 360, Microsoft Windows, PlayStation 3, PlayStation 4, Xbox One, iOS, Android, Windows Phone, and Nintendo Switch.

Brothers is presented from a third-person view overlooking the two brothers. The brothers are moved individually by two thumbsticks on the controller. The controller triggers also cause the respective brother to interact with the game world, such as talking to a non-player character or grabbing onto a ledge or object. The older brother is the stronger of the two and can pull levers or boost his younger brother to higher spaces, while the younger one can pass between narrow bars. The player progresses by manipulating the two brothers at the same time to complete various puzzles, often requiring the player to manipulate both brothers to perform differing functions (such as one distracting a hostile non-player character while the other makes their way around). Should either brother fall from a great height or get injured, the game restarts at a recent checkpoint. All of the in-game dialogue is spoken in a fictional language based on Lebanese Arabic, thus the story is conveyed through actions, gestures and expressions.

The story begins with a boy named Naiee paying his respects at the tombstone of his dead mother, who drowned at sea while he remained unable to save her. His elder brother, Naia, calls him to help their ill father reach the village's doctor, who in turn tells them the only way to save him is by collecting the waters from the Tree of Life. The brothers embark on their journey through the village, hills and mountains, while facing challenges like the local bully, a farmer's aggressive dog, and deadly wolves. They also help others along the way – reuniting a friendly pair of trolls, saving a man attempting suicide, and aiding an inventor.

The brothers eventually save a girl from being sacrificed by tribesmen. The girl in turn assists them on their journey, and begins seducing Naia, tricking the brothers to enter a cave, much to Naiee's dismay. Once inside, she reveals herself as a monstrous spider and while trying to eat Naia, the brothers manage to thwart and kill her by pulling off her legs – but not before she mortally wounds and stabs Naia. Nearing the end of their journey, the brothers at last reach the Tree of Life; Naia insists that Naiee venture on to reach the top of the tree. He collects the Water of Life, but as he returns to the bottom, he finds that Naia has already died from his injury. Unable to revive him using the water, Naiee buries and grieves for his older brother before returning to the village aided once again by a griffin.

Upon reaching the shoreline, Naiee must face his inability to swim in order to get the waters to his dying father. His mother's spirit appears to comfort and motivate him, and with Naia's spiritual guidance, Naiee is able to force himself to swim to the village. He is finally able to give the doctor the water, and the father recovers from his illness overnight. A short time afterwards, Naiee and his father mourn at the tombstones of both the mother and Naia while the griffin flies on into the mountains.

Brothers: A Tale of Two Sons, formerly known as P13, was developed by Starbreeze Studios and was the first game to come from the publishing partnership with 505 Games. The game uses Unreal Engine 3, and was developed in collaboration with Swedish award-winning film director Josef Fares.

Starbreeze sold Brothers intellectual property to 505 Games for $500,000 in January 2015. 505 Games continued developing the game for additional platforms, including the PlayStation 4 and Xbox One released in mid-2015, with director's commentary, the soundtrack, and a concept art gallery. Mobile versions of the game were over the next year; the iOS version was released on 22 October 2015, while the Android version of the game was released in 26 May 2016.

505 Games also developed a version for the Nintendo Switch to be released 28 May 2019. This version includes a special two-player co-operative mode where each player controls one of the two brothers in the game.

(0) Comments on "Brothers: A Tale of Two Sons Full Version"