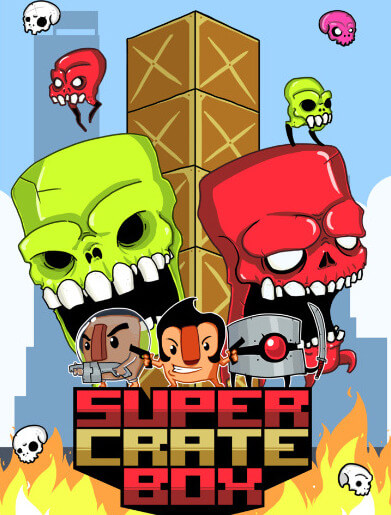 Super Crate Box is a shoot 'em up indie game by Vlambeer. It was first released for Microsoft Windows on 22 October 2010, and was followed with ports to OS X on 26 November 2010, to iOS on 4 January 2012, and to PlayStation Vita on 3 October 2012. A Commodore 64 demake of the game was developed by Paul Koller, with music by Mikkel Hastrup, and published by RGCD as Super Bread Box on 22 October 2013.

Super Crate Box's core gameplay revolves around a 2D map. Enemies continually spawn from the top of the map, and come in three varieties: small, large and flying. A crate is always available in a random location on the map, and picking up a crate gives one of 14 weapons, selected at random. At all times, there is a fire pit at the bottom of the map. If an enemy reaches the bottom of the map and falls into the pit, it will respawn at the top of the map with the same health but moving considerably faster. Contact with an enemy results in immediate death.

The goal of the game is to survive as long as possible by using the different weapons obtained from crates to kill enemies. The number of crates that the player picks up before dying constitutes as the score. By attaining certain numbers of crates in the game the player can unlock new weapons, game modes and cosmetic character skins.

There is a leaderboard available on the official website that tracks high scores for the various modes. The game supports joypad controls.

The game was widely praised by critics. Mike Mason from Push Square said "it's a twitch platformer-cum-shooter that preys on compulsion" and added "If you dare to open the box on a lazy day, don't expect to close it again for an hour", giving the game a score of 8/10. Edge rated the game 8/10, mentioning "The challenge is fierce; as your tally climbs above its previous best, the accompanying exclamation mark is a virtual eyebrow raised in surprise at your achievement." Brad Nicholson of TouchArcade said "The hooks are in its constituent parts, which seamlessly blend into a cacophony of arcade action surrounding this pure purpose of play", and gave the game 5/5 stars.