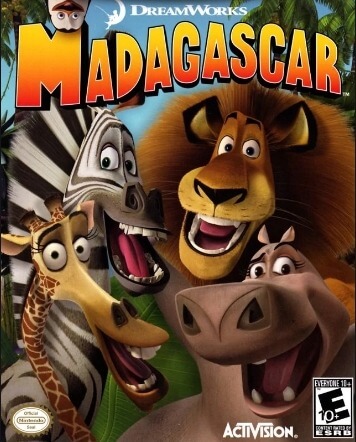 Madagascar is an action-adventure video game based on the animated movie of the same name. It was released on May 24, 2005 in North America and on June 30, 2005 in Europe. The Nintendo GameCube, Microsoft Windows (XP or newer), PlayStation 2, and Xbox versions were developed by Toys for Bob. The Nintendo DS and Game Boy Advance versions were developed by Vicarious Visions. Madagascar: Operation Penguin was the next Madagascar video game to be released on the Game Boy Advance. A sequel, Madagascar: Escape 2 Africa, was released on November 4, 2008.

The player mainly controls Marty the zebra, while in other levels the player can control Gloria the hippo, Melman the giraffe, and Alex the lion. Each character in the game has his or her own ability. To gain their abilities, the player must first find three cards, known as power cards, to gain the character's ability.

Marty the zebra, Alex the lion, Gloria the Hippopotamus and Melman the Giraffe live in the Central Park Zoo in New York. On Marty's tenth birthday, Marty starts to have doubts that the zoo is where he belongs, and finds that life in the zoo is boring. That night, a penguin living in the zoo named Skipper decides to break out of the zoo, and invites Marty to come with him, and gives Marty directions on how to clear paths. Skipper, in order to escape himself, is forced to abandon Marty in the process, but gives him more directions. Marty manages to make it to the main exit and leave. Realizing this, Alex, Melman and Gloria decide to go and look for him. As they find him, they are surrounded by police, tranquilized, and sent to a wild life reserve. Skipper and his team of penguins: Private, Rico and Kowalski are also on board. They escape from their crate and head for the bridge where they knock the captain unconscious and turn the ship around to Antarctica. Marty, Alex, Melman and Gloria fall into the ocean in the process. Alex is washed onto a beach unconscious, and soon wakes up. Finding an opened crate which belonging to Marty on the beach, he concludes that his friends are there too, and goes off to find them. In the jungle, he helps different animals with their tasks, and in return they give him his friends' whereabouts and finally reunites with his friends.

They go search for help, and find an entire tribe of lemurs having a party. The lemurs introduce themselves, and explain that the island they are on is called Madagascar, but as they talk, they are attacked by the Fossas, the enemies of lemurs. The animals protect the lemurs, and help them collect food for another party. After the party, Gloria finds that Alex is acting strange because he didn't eat any food during the party, and tells Melman to go find steak while she goes to find Marty, Melman fails in finding steak, and meets up with Maurice, Gloria and Marty. Marty announces that Alex bit him on the butt. Maurice explains that lions are supposed to eat other animals, and that Alex never harmed animals before because in the zoo food was given to him, and the four flee to the beach. A warthog named Wilbur, who falls in love with Gloria and agrees to give them information if she gives him a kiss after the work, tells them that the rescue beacon on the beach is broken, but there are many things lying around the beach that they can use to rebuild the beacon. They collect enough materials for the beacon and finally, a beacon like the statue of liberty is built.

Marty decides that he must go back for Alex. Meanwhile, Alex is hiding in the lair of the Foosa, feeling ashamed of himself. He encounters the Fossa leader and defeats him, after which Marty arrives and rescues Alex.

Madagascar received "mixed or average" reviews, according to review aggregator Metacritic. IGN rated the game a 7 out of 10, praising the presentation and sound while criticising the graphics, gameplay and lasting appeal.

GameSpot's Alex Navarro also rated the game a 7 out of 10 with praise going to the platforming gameplay and voice acting.