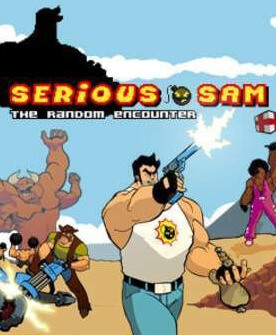 Serious Sam: The Random Encounter is a turn-based action role-playing video game developed by Netherlands-based indie development studio Vlambeer and published by Devolver Digital. It was released for Microsoft Windows on 24 October 2011.

After Serious Sam's protagonist, Sam "Serious" Stone was unsuccessful searching for antagonist Mental in the past, during the First Encounter, he decides to continue his search in the future. In order to find Mental, Stone teams up with mercenary allies, taking down hordes of enemies and solving puzzles. Having fought the minor enemies, players encounter ever-growing bosses, eventually leading up to the bosses reaching off-screen.

Serious Sam: The Random Encounter plays a mixture of an action role-playing game and a Japanese role-playing game. During the open world sequences, the player may roam around freely, but can eventually hit on a randomized mob wave of enemies. These mob waves consist of ridiculously high numbers of enemies of all kinds, where the player is given the task to gun these down. The gun combat is the game's JRPG part, where the player may switch weapons and shoot the weapon selected, choosing a direction, radius, or position to shoot at, as well as using one of the previously gathered items. During gameplay, the team grows from one to three persons, all of them having a turn each, giving the player more ability to take down incoming enemies. Additionally, the action RPG element adds to the combat's turns, where, while enemies are coming nearer, the player may move their characters, as a group, up and down in order to reach out of the aiming boundaries, previously set in the turn's preparation.

Serious Sam: The Random Encounter was developed from an early sketch Vlambeer made for a game that was set to become a "JRPG-alike" title. It was made as part of the Serious Sam indie series to build up anticipation to Serious Sam 3: BFE. However, Vlambeer lacked the time to develop the game before the release of Serious Sam 3: BFE, which led to them mainly working on the game in their hotel room, the plane back to the Netherlands, and at home with, as Rami Ismail stated, "a lot of jetlag". After a longer, silent development phase, the game was released on 24 October 2011 for Microsoft Windows.

Serious Sam: The Random Encounter received mixed to positive reviews from critics, where the review aggregator Metacritic gave the game an above-average score of 64/100, based on 11 critic reviews, and GameRankings a similar score of 64.43%, based on 14 critic reviews. Negative critiques arrived early, as Ryan Hodge from GamesRadar criticized that the game "banks so much on the players' collective nostalgia for Serious Sam that it forgets to actually be a good game." On the opposite hand, however, Christian Donlan from Eurogamer stated that "if the game's not enough to get the player excited, fans of Croteam's magnificently straightforward blaster should also note that Vlambeer ... has also crafted the purest game yet when it comes to the pleasures of running backwards and shooting things." Additionally, Eric Neigher from IGN praised the game's surprising quality, by saying "as what's essentially a marketing device, TRE could've ended up in the less-than-glorious ranks of games released to promo fast-food chains, but instead ended up being a really innovative take on an FPS conversion."