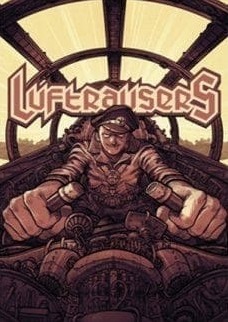 Luftrausers is a shoot 'em up video game developed by Netherlands-based indie developer studio Vlambeer and published by Devolver Digital for Microsoft Windows, OS X, Linux, PlayStation 3 and PlayStation Vita. It was released on March 18, 2014 and ported to Android by General Arcade on December 20, 2014. A demake of the game, titled LuftrauserZ, was developed by Paul Koller for Commodore 64, Commodore 128 and Commodore 64 Games System, and released by RGCD and Vlambeer on 8 December 2017.

Luftrausers is an airplane-based shoot 'em up. Unlike traditional shoot 'em ups, where the direction of the player craft is fixed, Luftrausers allows 360 degrees of motion, more akin to a multidirectional shooter. However, the player's main weapon can only fire from the front, forcing the player to take into account the position and angle of the airplane. Players must take into account the momentum of their plane while flying, using gravity and drift to maneuver as much as forward propulsion. There is no health bar: player health is indicated by a circle around the aircraft that shrinks as damage increases and naturally regenerates when not firing the weapon. Aircraft can be customized with dozens of combinations of engines, weapons, and hulls  that affect the soundtrack as much as the gameplay. Each weapon part comes with sets of challenges that give objects to strive for on top of the arcade nature of the game.

Jan Willem Nijman of Vlambeer started Luftrausers while on the airplane home from the March 2012 Game Developers Conference (GDC) in San Francisco. Polygon reported that he was inspired by the "beauty of his view" and did not have on-flight television. At the time, Vlambeer was finishing development on Ridiculous Fishing, a game whose development was marked by a high-profile struggle with a similar, subsequent game known as a clone.

Luftrausers is an update of Luftrauser, an earlier, free Flash game created by Vlambeer's Rami Ismail, artist Paul Veer, and composer Kozilek in the GameMaker: Studio engine and was ported to pure C++ by Michel Paulissen via his Dex converter tool. Vlambeer originally announced the game for release in Q2 2013 on PlayStation 3 and PlayStation Vita, having chosen those platforms due to their positive working relationship with Sony. In the weeks before the expected release, the Bangalore-based Rubiq Lab released a similar airplane dogfight game called SkyFar in April 2013 and Vlambeer contacted Apple and Google to intervene so as to avoid "another clone war". Rami Ismail's backpack containing "everything Vlambeer" including electronics and the game's code was stolen during E3 2013. Although their work was backed up, Ismail described the theft as "a giant pain".

The game was simultaneously released on Microsoft Windows, OS X, Linux, PlayStation 3, and PlayStation Vita (via Steam and the Humble Store) on March 18, 2014, being published by Devolver Digital. The game's two-and-a-half-year development cycle was profitable within three days of its release. On December 20, 2014, the game was ported to Amazon Fire TV by General Arcade.