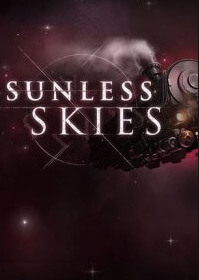 Sunless Skies is a role-playing video game developed by Failbetter Games. The game is a sequel to 2015's Sunless Sea.

Sunless Skies is an exploration and narrative focused role-playing video game. The game is played from a top-down perspective.

Sunless Skies is set in the same Victorian era-inspired world as Fallen London and Sunless Sea. The game is set ten years after the events of Sunless Sea. The player assumes the role of a captain of interplanetary locomotive.

The game was announced at the 2016 EGX expo. In February 2017, the studio launched a crowdfunding campaign on Kickstarter to raise funds for the game's development. Failbetter estimated the total cost of the game's development to be £330,000. They set a funding goal of £100,000, which was achieved four hours into the thirty day campaign. The game is being built on the Unity game engine and Failbetter's own narrative platform StoryNexus. The development team plan to release an in-development version of the game in 2017 using an early access model.

Failbetter CEO Paul Arendt noted that they didn't want a sequel to just be Sunless Sea 2 with bigger ships. Taking the Victorian setting into space appealed to them. The development team cited the science fiction and planetary romance works of authors C. S. Lewis, H. G. Wells, and Leigh Brackett as influences along with Art Nouveau and the 1999 game Planescape: Torment.

The game was scheduled to be released in May 2018, for Linux, macOS, Windows-based personal computers. The game was first delayed to September 2018, but was released on 31 January 2019.

While in development, the game was nominated for "Writing or Narrative Design" at the 2018 Develop Awards. After release, it was nominated for "Best Narrative", "Best Original IP", and "Game of the Year" at the Develop:Star Awards; for the "Creativity Award", "Best Game by a Small Studio", and "Best Role Playing Game" at The Independent Game Developers' Association Awards; for "Best Storytelling", "Best Indie Game", and "PC Game of the Year" at the Golden Joystick Awards; and for the Off Broadway Award for Best Indie Game at the New York Game Awards.