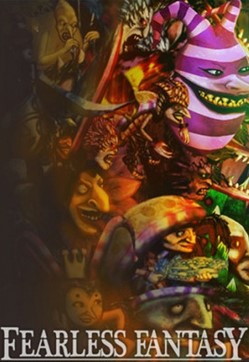 Fearless Fantasy is a parody role-playing video game developed by Enter Skies. Released in 2014, it follows Leon, a bounty hunter, that gets a task to rescue a person from the king's guard.

The game puts the players in a charge of leading a party of three: a knight, a hammer wielder, and a healer. The trio will work their way through a series of battles, interrupted by animated cutscenes and places to purchase certain equipment. There aren't any exploration elements throughout the story. While Fearless Fantasy is a turn-based Role-playing video game, it's combat is based on the gestures. In each turn, the players are able to choose a type of attack and have to properly create a successful combination of prompts to launch it. All party members and enemies have an "Active Time Battle" meter alongside their hit points and energy bars which will determine the order of their turns. Imagined as a parody, it often inserts jokes during the gameplay (swords are doubled up as laser rifles, matryoshka monsters, a troll move that attracts attention of the enemies by dancing, and others).

Upon its release, Fearless Fantasy was met with "generally favourable" reviews from critics for the iOS version, with an aggregate score of 84%.