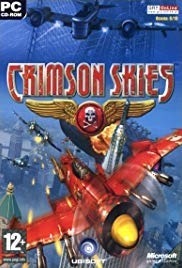 Crimson Skies is an arcade flight video game developed by Zipper Interactive and published in 2000 by Microsoft Game Studios. Although a flight-based game, Crimson Skies is not a genuine flight simulator, as the game is based less on flight mechanics than on action. According to series creator Jordan Weisman, Crimson Skies is "not about simulating reality—it's about fulfilling fantasies."

The game is set in an alternate history of the 1930s in which the United States has fragmented into a number of smaller sovereignties, and in which air travel has become the primary mode of transportation in North America. The game centers on Nathan Zachary, an adventurous air pirate seeking to rob the affluent of their wealth and power. Throughout the campaign, Zachary leads his gang of air pirates, the Fortune Hunters, on a quest to gain fame and riches.

Crimson Skies is often regarded as a "cult success", commercially successful only to a limited extent. The game has received generally favorable reviews; it has been noted for its high-quality voice acting, gameplay, and atmosphere. Notable technical issues, however, have been known to plague the game, the most notorious of which was the tendency to delete saved game files until a patch was released.

Crimson Skies is a cross between an authentic flight simulator and an arcade flight game. Although flight mechanics such as lift are still present, the game's planes are generally overpowered, allowing them to perform aerobatic maneuvers impossible in reality under similar circumstances. According to lead game designer John Howard:

We're not trying to build a realistic flight simulation, but at the same time, Crimson Skies isn't a cartoony, arcade-type game, either. We had to find a middle ground, where the planes were more powerful, more responsive and more intuitive to fly, so that the player can just concentrate on being a hero.

GameSpot has stated that "the flight model in Crimson Skies is light on the physics and heavy on the barnstorming." In this way, the site likened the game's arcade flight model to the "stunt-flying heroics of pulp novel fame", in which "daredevil pilots performed unbelievable (and quite impossible) feats of showmanship and gunnery." To this effect, the game features select "danger zones"—difficult spaces situated throughout the environment through which the player can fly to dissuade pursuing aircraft. Such stunts are also documented in the player's "scrapbook", which is the game's record of the player's accomplishments throughout the campaign.

The gameplay of Crimson Skies takes place through the player controlling an aircraft through the game's various environments. The game offers three cameras during missions: first-person perspectives with or without a cockpit visible, and a third-person view. The game's heads-up display features basic flight instrumentation such as the compass, altimeter, and speedometer, as well as a damage indicator for the player's aircraft and ammunition displays for the plane's primary and secondary weapons. The game also provides the player with a feature known as the "spyglass", which provides a magnified image of the selected target and indicates its current heading.

The game features eleven different playable aircraft, each of which can be customized. For any aircraft, the player can select its airframe, engine, armor, weapons layout, and paint scheme, although customization is limited by the weight capacity of the airframe and—in the single player campaign—the player's cash on hand. Outfitting an aircraft with different components affects its performance in terms of speed, maneuverability, stamina, and offense. The player is also able to equip his/her aircraft's guns and hardpoints with different types of ammunition and rockets, respectively.

The game's single player campaign has three difficulty levels, and spans twenty-four missions. Before the start of a mission, the plane and ammunition for both the player and his/her wingman can be selected, although wingmate commands are not available during gameplay.

In addition to the campaign, an instant action mode is available which allows the player to play individual missions or customized scenarios. Multiplayer is also available through the Reverb Gaming lobby, over a LAN or the Internet, or via a direct serial connection. Players can host games or join existing ones; the host selects the game's victory conditions and allowable aircraft components/ammunition. Multiplayer game modes include dogfight, capture the flag, and Zeppelin-to-Zeppelin combat.

The Crimson Skies universe is set in an alternate history of the year 1937. According to the game's backstory, factors such as the growing strength of the "Regionalist Party", the division between "wet" and "dry" states, and a quarantine caused by an Influenza outbreak resulted in a general shift in power from federal to state and local levels. After the Wall Street Crash of '29, states began seceding from the U.S. A number of independent nation-states form from the fractured United States; hostilities between these sovereignties eventually escalate into outright war.

After the breakup of America, the former nation's railroad and highway systems fell into disuse as they crossed hostile borders. Consequently, the airplane and the airship became the primary modes of transportation in North America, which in turn gave birth to air piracy. Although air militias formed to defend against the air pirates, continuous brushfire wars between the nations prevent the established governments from effectively repelling the pirate threat.