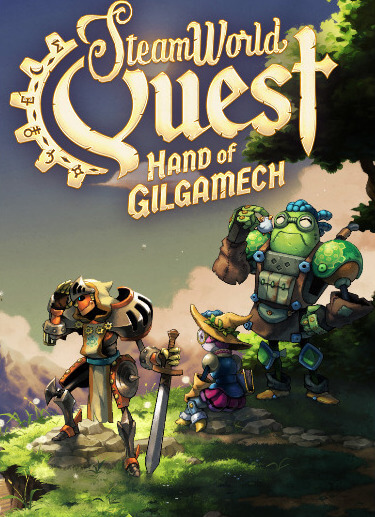 SteamWorld Quest: Hand of Gilgamech is a turn-based RPG and deck-building game hybrid that is part of the SteamWorld series of video games. It was developed by Image & Form and published by Thunderful Publishing. The game was released for Nintendo Switch on April 25, 2019 and released for PC on May 31, 2019.

The game follows a team of sentient steam-powered humanoid robots as they travel across a steampunk fantasy world fighting evil. It received generally positive reviews, citing the graphics and gameplay as strong points.

SteamWorld Quest is presented as a fairy tale told within the otherwise science fiction universe of SteamWorld Heist and is therefore not directly linked story-wise to the previous games. It follows Armilly and Copernica, two small-town friends who set out on a small journey that spirals into a much larger one.

The game is a side-scrolling video game and is separated into small explorable areas that the player is encouraged to loot for treasure. The player may encounter enemies and become engaged in battle. Attacks are performed by collecting punched cards that the robots can use to execute programs. The game uses standard RPG elements with the exception of steam pressure representing mana. The player must also build their own deck of attacks using character-specific cards.

SteamWorld Quest received an aggregate score of 80 on Metacritic. Matt Masem of RPGamer rated the game 4.5/5, calling it an "excellent adventure" with "beautiful" animation, and calling the story "wonderfully executed" despite being "standard RPG fare". Tom Marks of IGN rated the game 86/100, saying the combat system offers an "insane amount of choice". Nadia Oxford of USGamer rated the game 80/100, criticizing the game as "light on character and worldbuilding" but calling it a "fun, airy RPG".