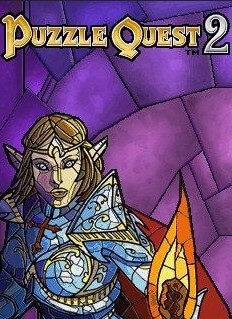 Puzzle Quest 2 is a video game developed by Infinite Interactive for the Nintendo DS, Xbox Live Arcade, iOS, Android, Windows Phone 7, and Microsoft Windows. It was released on June 22, 2010 by D3 Publisher. A version for the PSP was in development, but was cancelled due to sound bugs. It is the sequel to Puzzle Quest: Challenge of the Warlords, and like its predecessor, it combines role-playing with strategy and puzzle elements. It uses a competitive, Bejeweled-style, "match three game" playfield to simulate combat and other activities common to role-playing games.

Puzzle Quest 2 received generally positive reviews, garnering a Metacritic score of 81% for the Xbox 360 release and 74% for the Nintendo DS release. IGN's review praised the game's combination of casual puzzle gameplay with added layers of depth and extensive single- and multiplayer modes. In his review for Eurogamer, Christian Donlan called the game's puzzle mechanics "flavourless" and its fantasy setting "bland," but stated that the game remains "frighteningly talented when it comes to targeting your compulsions." Giant Bomb's Brad Shoemaker identified the game as a return to form for Infinite Interactive after what he identified as missteps in Puzzle Quest: Galactrix and Neopets Puzzle Adventure. The PC version received positive reviews from GameSpot, which praised the addictive gameplay and from 1UP, whose review states that the game "improves on the original in almost every way."