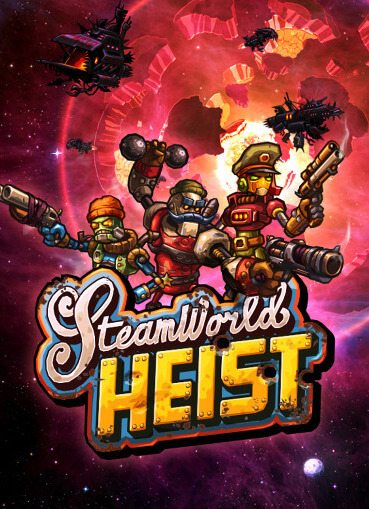 SteamWorld Heist is a turn-based strategy shooter developed by Swedish video game developer Image & Form. The third installment of the SteamWorld series and the sequel to SteamWorld Dig, SteamWorld Heist has the player control Captain Piper Faraday, a smuggler and occasional pirate, as she recruits a ragtag team of robots and sets out on a space adventure. The objective of the game is for players to board, loot, and shoot their way through enemy spaceships.

The Xbox One version is on hold in favour of future projects from Image & Form. On December 21 to December 28, 2017, the game was free for the Twitch Prime subscribers.

SteamWorld Heist is a side-scrolling strategy game with focus on skill rather than chance. The core gameplay consists of recruiting a team of steam-driven robots, boarding enemy spaceships and taking down rivaling robot factions in turn-based shootouts. A majority of the game's levels are procedurally generated.

In battle, the player controls the aiming of all firearms and can bounce bullets off the environment for ricocheting trick shots. As the game progresses, players can upgrade and customize their robot crew with different consumables, equipment, weapons, and hats. Some weapons are equipped with laser sights to assist the player with the free aiming.

The game has over 100 different weapons and almost 100 hats to collect. These can be found as treasure during missions or bought in designated shops. Hats are primarily obtained by shooting them off opponents' heads and collecting them.

After finishing the game, players have the option to start the game again with New Game+.

The game's official soundtrack, Music From SteamWorld Heist, is composed and recorded by the steampunk band Steam Powered Giraffe. The band members appear as robots in different bars (such as The Spine at Lola's bar before it got shutdown) throughout the game while performing songs from the soundtrack.

The first downloadable content pack, called The Outsider, was showcased at the Penny Arcade Expo in early April 2016 and was released on April 28, 2016 for the Nintendo 3DS. When Image & Form announced the release date of SteamWorld Heist for the PlayStation 4 and the PlayStation Vita, the company confirmed that The Outsider would release for those systems on the same date as the full game. It was also available for Microsoft Windows, Mac OS X, and Linux on release. The Outsider was included on disc in the Wii U and PS4 retail editions of the game. The Outsider was included within the Nintendo Switch's Ultimate Edition port of the game.

SteamWorld Heist has received positive reviews on all platforms, with current scores ranging from 81 to 91 on Metacritic.

5/5 - USgamer: "I loved SteamWorld Heist and I think everyone should play it."