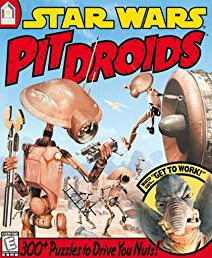 Watto has bought a series of new pit droids, and tasks the player with transporting them to the Pod Racing arena by avoiding all the environmental obstacles.

The player manoeuvres the pit droids through a series of puzzles such as road blocks and junk heaps. Players can also create their own droids and trade them online with other gamers.

Matt Diamond of Inside Mac Games praised the puzzle, variable difficulty, graphics, and music. Brad Cook of All Game Guide complimented its detailed graphics, intricate gameplay, and jazzy soundtrack. Just Adventure's Ray Ivey liked the aesthetic quality of the game manual. The Scotsman said the game was very playable for a TV-tie in and offered educational opportunities. IGN gave the game a rating of 7.5. The Boston Herald thought the game offered an interesting test of children's logical abilities. The Boston Globe thought it was a standout in the children's software genre, mentioning its animation, sound effects, and tutorial. CVG said the game was easy to play, but added that its overly simple concept reduced its replayability.

Pit Droids won Computer Games Strategy Plus's 1999 "Classic Game of the Year" award. The editors wrote, "This game is not only mind-bogglingly fun for puzzle fans of all ages, it is also solid, well-designed, addictive, attractive, and arguably the year’s best use of the Star Wars Episode I license."