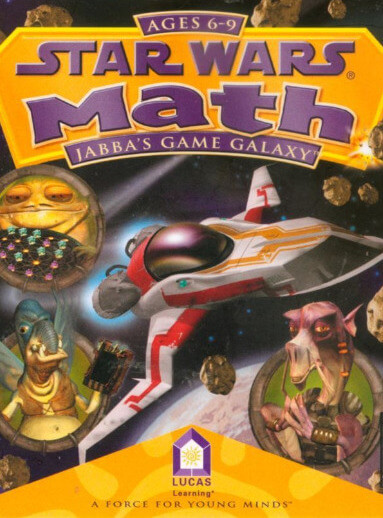 Our main goal with Star Wars Math was to create an engaging game for kids, that still has all the components parents are looking for: recognizable math content, high replayability, and an overarching goal with lots of rewards and encouragement. We wanted to go beyond the standard math drill and practice software game and excite kids about math in a new and fun way that was well integrated with the Star Wars universe.

After working on various games as LucasArts - the last of which was Mortimer and the Riddles of the Medallion, Collette Michaud helped to found the children's edutainment-themed sister company Lucas Learning and served as project leader and designer of “Droidworks” and “Star Wars Math Jabba’s Game Galaxy." Early on, a few Lucas Learning employees met with George Lucas at Skywalker Ranch to discuss his goals or creating learning software for children, which led to Lucas offering some early noted for DroidWorks; however he soon became preoccupied with the Star Wars prequel trilogy so didn't offer much interaction after that, including for Star Wars Math.

At the 2001 National Educational Computing Conference, Lucas Learning announced the direct-to-school distribution of 6 of their titles, including Star Wars Math.

Buying via the LucasArts Company Store, customers would get a limited-edition magnetic jigsaw puzzle.

The aim of the game is to build spaceships and travel around the galaxy.

Players play minigames based on popular games such as Dueling Dice (a simplified version of blackjack) and Holochex (based on checkers).

Each of the minigames "supports the content standards for primary grades developed by the National Council of Teachers of Mathematics (NCTM)".

Macworld praised the animation, though felt the educational content was lacking. Newsday and The Washington Times liked the "extraordinary" animation and the Hollywood soundtrack, ultimately deeming it a fun experience for fans of the franchise. The Washington Times liked that the game's construction "slyly" taught players basic arithmetic and logic in a "totally fun" way that made the reviewer smile. Daily Campus disliked the character of Watto, though felt he was redeemed in games such as Star Wars Math. Chron felt the minigames were "agreeably atmospheric and offbeat", though felt they were more work than play. Vandal asserted that in the ourvre of Star Wars titles, this is one of the few educational games, and requires players to do continuous mathematical calculations. Allgame felt the game contained both good and bad elements of design.

The Parenting Center honoured it as a Seal of Approval Winner Holiday 2000.