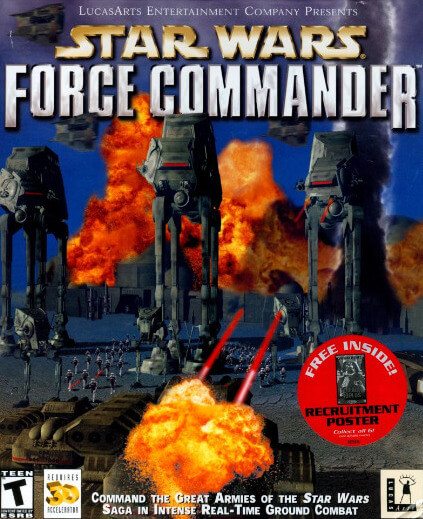 Star Wars: Force Commander is a real-time strategy video game released for the Microsoft Windows platform on March 21, 2000. It was co-developed by Ronin Entertainment and LucasArts, and published by LucasArts. Its plot interweaves between Star Wars: A New Hope and Return of the Jedi, taking in key battles. Peter McConnell created remixed tracks of John Williams' original score using influenced from hard rock and techno music.

Reception by critics was mixed, with aggregate website GameRankings reporting a 58.42% approval rating. Critics cited poor controls as a primary issue. Reviewers were divided on the quality of the game's visuals, with some feeling they were dated, and others of the opinion that they were strong. Gameplay was generally considered simplified in comparison to other real-time strategy games.

Star Wars: Force Commander is a real-time strategy video game. The player commands forces as though they are the commander rather than an infantry unit. The game utilizes a birds-eye view around a 3D map. The levels are largely plot-focused, with initial levels playing as the Imperial faction against the Rebellion, whilst as the plot progresses and the character defects to the Rebellion, players then fight against the Imperials. Levels are ground assault based, as the game lacks space combat. Outsides of the main story-mode Campaign, scenarios can be re-played under the Scenario option, and players can set up their own battles in the Skirmish mode where up to four sides can compete against one another, though they only have the faction choice of Imperials or the Rebellion.

The game also features a few options to connect with other players via multiplayer. Up to six players can join together, and Local area network (LAN) and TCP/IP connections are supported. Historically the game was supported via the Microsoft Gaming Zone, however Zone services have since been shut down. LAN gameplay is limited to two players. The game's campaign is not available in multiplayer. Instead an instant action mode is used. Players can choose any combination of teams or work together to challenge the AI computer player.

The game interweaves its story through the events of Episodes IV through VI, sometimes intersecting with known Star Wars events, while telling an original Star Wars story. It is shown from the point of view of a young officer in the Imperial Navy, Brenn Tantor, who begins as a stormtrooper, but soon enough is given his own command. The first task (from the training missions) is to search for an escape pod that landed on Tatooine, and then track the droids that were inside - which is a reference to the opening scenes of Star Wars Episode IV when C-3PO and R2-D2 escape Imperial clutches via an escape pod which crashes on Tatooine.

The main character is loyal to the Empire for the first half of the game, until his brother, Dellis Tantor discovers that the Empire killed their father. Dellis is imprisoned by the Empire for revealing this information, though Brenn is initially led to believe that Dellis has been killed. Brenn defects to the Rebel Alliance and proceeds to fight his former commanders. As well as the Tatooine training missions, the player participates in the Battle of Hoth (from the Imperial point of view) and the Battle of Endor (as a Rebel). The game ends with the battle to capture the Imperial Palace on Coruscant, and ultimately the liberation of Dellis.

Originally conceived as a 2D strategy game, LucasArts scrapped the overall design after its first public viewing at E3 1998. LucasArts decided instead to use an optimized version of a 3D engine supplied by Ronin Entertainment. The title was jointly developed by LucasArts and Ronin Entertainment, using Ronin's programmers and engine partnered with LucasArts' project leadership, designers, and artists. The latest and last patch for the game is version 1.1 released in March, 2000. One feature of note in Force Commander is its music, which consists of remixes of John Williams' original Star Wars scores, done by Peter McConnell. The music is a mixture of hard rock and techno. Over 3,500 voice lines were recorded for the game.

Star Wars: Force Commander was met with very mixed reception. Greg Kasavin of GameSpot gave the game a 6 out of 10. He cited dated graphics, ineffective controls, and flawed gameplay as reason the game "falls short of its ambitious intent." Kasavin conceded the game "has some good ideas. Its campaign has an involving plot and interesting mission objectives", and praised the 3D mission briefings. Mark Hill of PC Zone felt that while playing from the perspective of the Galactic Empire was a "nice twist, but merely dumping this style of game into the Star Wars universe is not innovative enough." Nick Woods of AllGame felt that the game's 3D models were "blocky and not detailed" and added that there are "many other RTS games on the market better than this one.". Tal Blevins of IGN gave it a score of 4.7 out of 10. In a feature on the history of Star Wars games, IGN's Rus McLaughlin called Force Commander "a blocky, buggy, undiluted failure". A similar article in GMR Magazine from March 2004 listed Force Commander as the worst Star Wars game. In the book Rogue Leaders: The Story of LucasArts, author Rob Smith said the "dated-looking visuals and clumsy controls turned off strategy gamers." Hollywood.com placed it fifth in a list of worst Star Wars video games. The staff felt that Force Commander had "an unwieldy camera and uninspired combat." Rock, Paper, Shotgun's Alec Meer was also highly critical of the game. "I didn’t make it past the first few levels. It was miserable."

In PC Gamer's article on the history of Star Wars games on PC, author Chris Thursten called Force Commander "ambitious but rough around the edges." Craig Majaski of Gaming Age praised the game's easy learning curve, visuals and music. He also praised the 3D presentation and felt the models were "excellent", but also noted that the camera often was difficult to control. Michael Lafferty of GameZone felt that, while enjoyable, Force Commander did not provide as much depth as other real-time strategy games, specifically mentioning the Command & Conquer series. Electric Playground gave it a 7 out of 10. A CNet reviewer felt that the game requires those not familiar with the genre to frequently reference the documentation, but noted that "Star Wars fans and intermediate-level gamers who like third-person views" would enjoy the game. Soren Johnson, then programmer Maxis berated the game's "infamously difficult" camera on his Gamasutra blog. IGN Germany's Robert Hähnel listed Force Commander among his picks for Star Wars games he felt deserved a sequel.