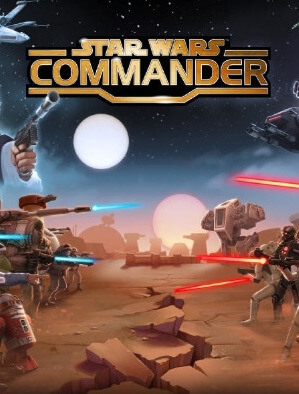 Star Wars Commander is a strategy game that combines attacks on other players with attacks against computer generated bases. The game's storyline is set in the Star Wars universe with player choosing to play for the Rebel Alliance or the Galactic Empire.

The player can create their own base by earning coins and alloy. This game is similar to Clash of Clans in the way that the player can upgrade their buildings by attacking other players and winning defenses.

If the player gets attacked, they lose or gain medals depending if they get a win or not. The more medals the player has, the better their opponents will be.

The players can join a squad where they can communicate through chat and request troops. They can post replays of their recent battles there as well. The leader of the squad can edit the squad's name and promote members to officers. If the leader leaves the squad, the member with the most medals becomes the leader of the squad. The player can participate in Squad Wars as well which are two squads warring.

There are six planets: Er'Kit, Tatooine, Hoth, Dandoran, Takodana, and Yavin 4 which players can go to.

The main currencies of the game are credits, alloy, and contraband. Credits are used to pay for troops, while alloy is used for upgrading the headquarters. Contraband is a currency that the player unlocks at headquarters level six upon completion of a Contraband Safehouse. It is used to buy the Droideka Sentinel for 12,000 contraband and a Droideka Oppressor for 45,000 contraband, and train troops in a cantina.