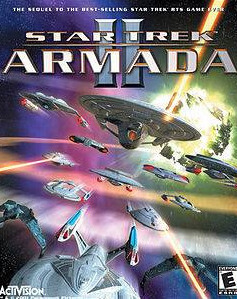 Like its predecessor, Armada II is set in the Star Trek: The Next Generation era of the Star Trek universe. The game showcases events in the Alpha Quadrant between the United Federation of Planets, the Klingon Empire, the Romulan Star Empire, the Cardassian Union, Species 8472, and the Borg.

Set just six months after the events of Star Trek: Armada, the Borg once again threaten the Alpha Quadrant. They have created a new ship capable of assimilating entire worlds in just a few seconds. After routing the attempted foothold, Captain Picard discovers a new type of nebula: a tachyon nebula. Intrigued, Picard discovers a new type of transwarp gate called a Transwarp Portal, capable of sending fleets of starships from one quadrant to another almost instantly, explaining how the Borg managed to get so deep into the Alpha Quadrant undetected. Starfleet Command then orders Picard to seize control of it and launch a counteroffensive into the heart of Borg space in the Delta Quadrant, into the Borg staging grounds. Though successful, some of the Federation forces, Picard included, are left stranded when the Transwarp Portal collapses due to a destabilization of the inter-spatial transwarp manifolds.

The Borg Queen, stranded in the Alpha Quadrant by the same twist of fate that trapped Picard on her side of the galaxy, discovers that Species 8472 has found a way into the Alpha Quadrant. She attempts to mass an armada to suppress this threat by assimilating native species planets, ships and technologies, but its growth is stunted by the constant attacks from the Federation. She then realizes that only by working with the Federation they can defeat Species 8472. The Federation and the Borg Collective create an alliance and venture into Species 8472's fluidic space to destroy their staging grounds by destroying the Rift Maker, thus ending the threat to the Alpha Quadrant by closing all the rifts.

The game received more "mixed" reviews than the original Star Trek: Armada, according to the review aggregation website Metacritic.