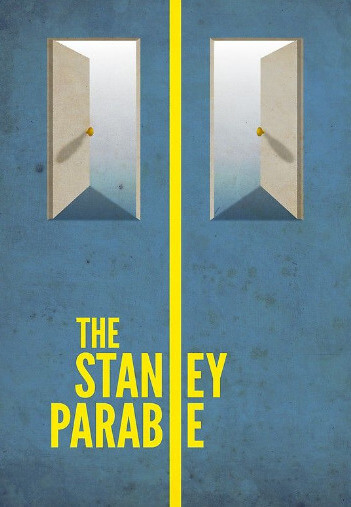 
The Stanley Parable is an interactive storytelling and walking simulator video game designed by American developer Davey Wreden. The game was originally released on July 27, 2011 as a free modification for Half-Life 2. A high-definition stand-alone remake, including new story elements, was again designed by Davey Wreden together with Source engine modeler William Pugh, under the Galactic Cafe studio name. The remake was announced and approved via Steam Greenlight in 2012, and was released on October 17, 2013 for Microsoft Windows. Later updates of the game added support for OS X on December 19, 2013, and for Linux on September 9, 2015.

While both the mod and the remake use the first-person perspective common to other Source engine mods, there are no combat or other action-based sequences. Instead, the player guides Stanley, the game's protagonist, through a surreal environment while the narrator, voiced in the remake by British actor Kevan Brighting, delivers exposition. The player has the opportunity to make numerous decisions on which paths to take, and because at times the narrator says what Stanley will do next, the player can choose to ignore the narration and make a different choice. Every choice made by the player is commented on by the narrator, and depending on the choices the player makes, they will encounter different endings to the game before it restarts.

Wreden envisioned the game after considering that most major video game titles confine the user to its rules, and considered how to construct a narrative to challenge that notion. Outside of Brighting's voice work as the narrator, Wreden built the modification himself, initially as a personal project for his career goals but soon expanding to a wider release once he had shown it to friends and other players. The modification received critical attention as a new variation of creating interactive storytelling within a game engine, and provided a thought-provoking narration to discuss with others on the nature of choice and predestination within video games.

The remake expanded the experience, recreating many of the original mod's decisions within new environments while adding several more story pathways that could be followed. The standalone game has received similar critical praise from journalists favoring the expanded narrative and commentary on player choice and decision-making in modern video games.

An expanded edition entitled The Stanley Parable: Ultra Deluxe is scheduled for release in 2020, which will include release on consoles together with additional content.

The game is presented to the player from the first-person perspective. The player can move around and interact with certain elements of the environment, such as pressing buttons or opening doors, but has no other controls.

The story is primarily presented to the player via the voiceover of the game's narrator, who explains that the protagonist Stanley works in an office building, tasked to monitor data coming on a computer screen and press buttons appropriately without question. One day that screen goes blank. Stanley, unsure what to do, starts to explore the building and finds it devoid of people.

At this stage, the story splits off in numerous possibilities, based on the player's choices. The narrator continues the story, but when the player comes to an area where a choice is possible, the narrator will suggest which route Stanley will take. The player can opt to go against the narrator and perform the other action, forcing the narration to account for this new direction which may return the player back to the target path or create a new narration. For example, the first choice the player makes in the game is at a set of two open doors, with the narrator stating that Stanley chose the left door; the player can choose to follow this narration, which keeps the narrator's story on track, or may choose the right door, which causes the narrator to adjust his story to get the player to return to the 'proper' path. Because of this, much of the story is considered thought-provoking about the nature of choice and decisions. The narration also breaks the fourth wall on several occasions in handling the player's decisions.

A total of six possible endings exist in the original mod, and Wreden states it would take about an hour for the player to experience them all. The remake does not alter the fundamental gameplay or initial narrative, and in addition to the original six endings, adds in sixteen more possible endings and sections designed around those aspects of choice.

Within two weeks of its release, the modification was downloaded more than 90,000 times. Responses of most players were positive, and Wreden became "an overnight internet sensation among hardcore gamers."

The Stanley Parable modification was praised by journalists as a thought-provoking game, praising it for being a highly experimental game that only took a short amount of time for the player to experience. Many journalists encouraged players to experience the game themselves, desiring to avoid spoilers that would impact the player's experience, and to offer discussions about the game within their sites' forums. Ben Kuchera of Ars Technica noted that while the game purportedly gives the player choice, many of these end up lacking an impact, as "to feel like you're in more control than you are". Brighting's voice work was considered a strong element, providing the right dry British wit to the complex narration. Alex Aagaard from What Culture believes that The Stanley Parable "will be regarded as one of the most pioneering games of all time" during videogames' transition from entertainment to a legitimate and respected art form.

The game was listed as an honorable mention for the Seumas McNally Grand Prize and "Excellence in Narrative" award at the 15th Annual Independent Games Festival. The Stanley Parable received the Special Recognition award at IndieCade 2012.

The standalone high-definition remake has received critical acclaim from reviewers. At Metacritic, as of November 15, 2013, the game holds an 88/100 score based on 45 critic reviews. Forbes listed Wreden in its 2013 "30 Under 30" leaders in the field of games for the success and marketing of The Stanley Parable. For his work on the game, William Pugh was named as one of 18 "Breakthrough Brits" for 2014 by BAFTA.

Brenna Hillier of VG247 opines how the standalone game highlights the current problems in writing story-driven games, and that "it takes the very limitations of traditional gaming narratives and uses them to ruthlessly expose their own flaws". Ashton Raze of The Telegraph considered that the game "offers ... a look at, not a critique of ... the nature of narrative construction" that can be a factor in other video games. The remake won the Audience Award and was nominated in the categories of "Excellence in Narrative" and "Excellence in Audio" along with being named as a finalist for the Seumas McNally Grand Prize for the 2014 Independent Games Festival Awards. The game was nominated for "Best Story", "Best Debut Game", and "Game Innovation" awards for the 2014 BAFTA Video Games Awards, while Brighting's performance was nominated for the "Performer" award. At the 2013 National Academy of Video Game Trade Reviewers (NAVGTR) awards the game won Writing in a Comedy and Performance in a Comedy, Lead (Kevan Brighting as Narrator).