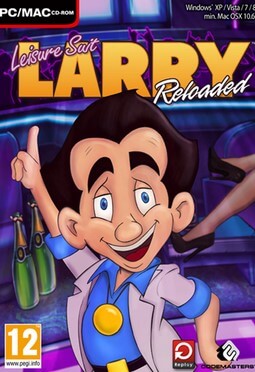 Leisure Suit Larry: Reloaded is a point-and-click adventure game released on June 27, 2013 by N-Fusion Interactive, Intermarum and Replay Games working with series creator Al Lowe and intellectual property holder Codemasters. The game is available for Microsoft Windows via Steam and GOG, OS X, Linux, Android and iOS. It is an enhanced remake of the 1987 Sierra On-Line adventure game Leisure Suit Larry in the Land of the Lounge Lizards. It is the second remake of this game, following the 1991 remake, which featured VGA graphics.

Development was crowdfunded via Kickstarter, and claims the title of "first major video game to be released with funding from Kickstarter", being the first release among major crowdfunded games in the video game crowdfunding boom following the successful funding of Double Fine Adventure.

Like the first (1991) remake of Leisure Suit Larry in the Land of the Lounge Lizards, the game employs a point-and-click interface over the original 1987 version's text parser. The game consists of a variety of puzzles, which can be solved by looking at, picking up, licking, talking to or using items on a variety of objects and people in the game.

There are five buildings in the game: Lefty's Bar, a mini-mart, a love chapel, a multi-floor casino, and a disco club. The locations are fully explorable to the player from the beginning of the game, although somewhat limited by the money in Larry's wallet, as he needs to pay a cab fare to travel around. Larry can always earn additional money by gambling on the slot machines that are placed all over Lost Wages, but should he run entirely out of money, a local bum will take pity on him and hand him some change to help him get back on his feet.

Plot-wise, the game is closely based on the original version; this extends to the time of the setting, which is still in the 1980s. Larry Laffer, an almost 40-year-old software seller, having grown weary of his lonely life, has decided to travel to the resort city of Lost Wages (a parody of Las Vegas) in an attempt to lose his virginity and maybe even find true love.

To help the project along, a Kickstarter campaign was launched in early April 2012 during which $655,182 (the goal of the project was $500,000) was raised within 30 days from 14,081 backers. Several ex-Sierra Entertainment employees got involved with the project alongside Larry's creator Al Lowe, including Josh Mandel and Leslie Balfour. The soundtrack of the game was composed by Austin Wintory, a Grammy-nominated composer. The remake was promised by the Replay Games team to have an additional girl and expanded dialogue for trying certain things, which were promised to the players if the goal of $650,000 was reached.

Al Lowe stated: "One of our goals with doing this remake was not to do a remake. We didn’t just want to port the game over with higher-res and better graphics. We wanted to do a much better game and it gave me a chance to fix some of the puzzles that I’ve hated for twenty five years that I wish I had changed back when. ... And I’d like to say to all of those that pirated the original Larry games, we’re going to give you a new chance to come clean and own up—man up—and buy a copy come January." Lowe also said that the rest of the Leisure Suit Larry series, or even other classic Sierra adventure games, might be remade if sales of this game enabled them to fund future titles.

The game was supposed to be released in October 2012, but once the Kickstarter campaign passed through the $650,000 goal, a new potential love interest was added to the game, a girl named Jasmine. The new content was scheduled for a March 2013 release, then delayed further to late May/June 2013. Al Lowe announced on June 18, 2013 that the final release date would be June 27, 2013 and Leisure Suit Larry: Reloaded appeared to be the first Kickstarter game to ship.

All games from the serie "Leisure Suit Larry"