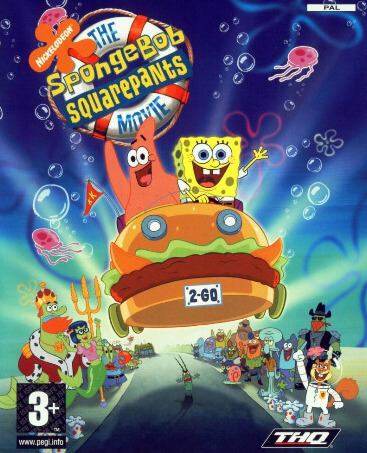 The SpongeBob SquarePants Movie is a 2004 video game based on the live action/animated film of the same name. The game was released on the PlayStation 2 (PS2), Xbox, GameCube, Microsoft Windows and the Game Boy Advance. The PlayStation 2, Xbox, and GameCube versions were developed by Heavy Iron Studios. The Game Boy Advance version was developed by WayForward Technologies. The Microsoft Windows version was developed by AWE Games. Most of the film's cast reprise their roles.

According to Metacritic, the game received mixed to favorable reviews.

The plot of the video game is very similar to the film. King Neptune's crown has been stolen by Plankton and SpongeBob and Patrick must retrieve it from where Plankton sold it to (Shell City). A few areas in the game are not seen in the film, such as where SpongeBob and Patrick must escape Gooberland (their dreams) by following the Goofy Goober in the Patty Wagon. Much of the locations in the game greatly exaggerate the film's screen time; for example, SpongeBob never had to tour "Planktopolis" in the film, but he does so in the game. And later again to the Krusty Krab 2, in the Patty Wagon (requiring several Goober Tokens to get it back as this is in their reality, not their dreams). The gameplay has features that are reminiscent of point-and-click adventure games, similar to that in the PC version of SpongeBob SquarePants: Lights, Camera, Pants! and SpongeBob SquarePants: Employee of the Month. It mainly follows around SpongeBob and Patrick in a various number of locations. The game consists of 8 chapters that loosely follow the plot of the film, with additional story details being described in cutscenes between chapters that feature narration over still pictures.

According to Metacritic, the GameCube, PC, and Xbox versions of The SpongeBob SquarePants Movie have received "Mixed or average reviews," while the PS2 version received "Generally favorable reviews." On GameRankings, the GBA version has a rating of 53 percent.

Nintendo Power, reviewing the GBA version, noted the ability to change paths throughout the game, but wrote that "some areas are more difficult to reach than they should be, making the platforming tricky at times." Hollingshead criticized the GBA version for its repetitive gameplay and its inclusion of Patrick as a playable character, writing that "despite the appearance of a dual partnership in the game, it quickly becomes evident that it's really only one playable character that's been melded from two." Hollingshead wrote that "unlike the console versions, the story here feels tacked on and doesn't really do much to tie the levels together in any sort of cohesive manner." Hollingshead praised the graphics and wrote that the music was "the best part of the game," but concluded that the console versions "are much more fun."

Hollingshead praised the PC version for its graphics and sound, and wrote, "The humor from the TV show has been translated very well to this computer game, and some of the dialogue is a riot. The characters all have funny things to say, and there are plenty of sight gags, too. Playing as Plankton was a great idea, and kids will love listening to the diminutive evil-ruler wannabe as he comments on the people and things around him." However, Hollingshead – who felt that the game would be best for children who were between the ages of 6 and 10 – wrote that "it's a short game, and because the adventure is the same each time through, there's not much replay value here."

Kristen Salvatore of Computer Gaming World felt that the PC version and its puzzles would appeal primarily to young children, but wrote that people expecting to "play" the movie would be disappointed. IGN's Levi Buchanan, who reviewed the cellphone game version, praised its graphics but criticized its simplicity. Buchanan wrote that the game "certainly has plenty of goofball charm and personality", but concluded that it was "something of a let-down" in comparison to previous SpongeBob cellphone games, as well as the "pretty fun console version of the game".

The GBA version sold an estimated 780,000 copies; in August 2006, the game was ranked at number 25 on Edge magazine's list of "The Century's Top 50 Handheld Games," arranged by number of copies sold.