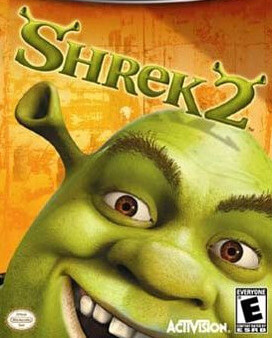 Shrek 2's storyline follows a similar, but slightly different plot compared to that of the movie. Shrek and Fiona are on a journey to the Kingdom of Far Far Away to visit Fiona's parents. Shrek's in-laws aren't too thrilled that a crude ogre is married to their beloved daughter, Fiona, so the battle for acceptance ensues. The game also covers things not shown in the film. Plot elements are delivered primarily through a storybook interface (text and illustrations) shown before each level.

For the GameCube, PlayStation 2, and Xbox version of the game, the player is able to play as Shrek or nine of his friends throughout the game, and travel through 11 levels, while being able to switch between the four characters available in each level. In each level, the player controls a team of four characters, and can switch between them at any point. Each character has a unique ability that aids them in fighting enemies or moving through the environment (for example, Donkey can destroy obstacles and Fiona can slow down time).

Shrek 2 was created by Luxoflux and KnowWonder and published by Activision in 2004. The game is based on the 2004 animated film of the same name by DreamWorks. TDK Mediactive showed the game at the E3 convention in May 2003. Activision announced on December of that same year that they would be working with DreamWorks to develop and publish video games based on the upcoming Shrek 2 movie, before they released the first trailer for the game in Spring of 2004.

Two versions of the game were released for the PC; one developed by KnowWonder for younger audiences using Unreal Engine 2, and the other a port of the original console release under the title Shrek 2: Team Action which was developed by Beenox.

The score for the game was composed by Kevin Manthei and Kevin Riepl. The soundtrack album consists of 58 tracks with over 65 minutes of score. It was released on May 6, 2004, by KMM Productions.

IGN reviewer Mary Jane Irwin called the GameCube, Xbox, and PlayStation 2 versions of Shrek 2 "an amusing jaunt into the world of the movie," and Craig Harris, another reviewer of IGN, called the GBA version "an absolute treat, especially for those who dig the artstyle of the film," though he stated it to be "nothing new."

The game, along with fellow movie sequel based game published by Activision, Spider-Man 2, shipped more than 5 million units combined and were the best-selling titles of May and June, respectively.

In the United States, Shrek 2's Game Boy Advance version sold 700,000 copies and earned $18 million by August 2006. During the period between January 2000 and August 2006, it was the 35th highest-selling game launched for the Game Boy Advance, Nintendo DS or PlayStation Portable in that country.

By July 2006, the PlayStation 2 version of Shrek 2 had sold 850,000 copies and earned $26 million in the United States. Next Generation ranked it as the 70th highest-selling game launched for the PlayStation 2, Xbox or GameCube between January 2000 and July 2006 in that country. Combined console sales of the Shrek series reached 2.5 million units in the United States by July 2006.