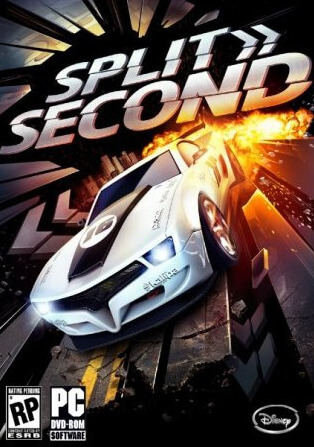 Split/Second (released in Europe as Split/Second: Velocity) is an arcade racing video game developed by Black Rock Studio and published by Disney Interactive Studios for Microsoft Windows, PlayStation 3, and Xbox 360. Revealed in March 2009, the game was released in May 2010 and was later released for OnLive in June 2011. In the game, players take part in a fictional reality television show, consisting of a variety of events, each focusing on destructible environments triggered remotely by driver actions known as "power plays".

Split/Second was ported to the PlayStation Portable on November 2010.

In Split/Second, players take part in a fictional reality TV program where participants race for money and glory. Throughout a race, players can build up their "power play" meter by performing stunts, such as jumps and mid-air overtakes, and precision driving, such as drafting opponents and drifting. As the player builds up their meter, special events can be triggered, which create obstacles for other players, open up shortcuts, or alter an entire section of the race course. These triggers are also activated by the AI opponents.

Such events range from shockwave-inducing explosions to buckling highways and dam breaches. The severity of the events available to trigger varies depending on how full the player's meter is. The Level 1 events become available when one of the three segments of the bar are full and the Level 2 events can only be triggered upon a full bar. Event locations, and the vehicles they will affect, are highlighted with blue icons for the level one power plays, and red icons for level two, and the player must time the action accurately in order to hinder his or her competitors as much as possible. The power play meter is used up by one segment once a level one event is triggered, so the player must also choose whether to activate the less destructive first-level events as soon as they are available, or save their power play energy and build it up further in order to trigger the top-tier actions.

There are also certain power plays that can be reused, such as explosives dropped from helicopters, exploding tanker trucks, and shortcuts, but some other power plays are permanent and can only be used once in a single race. Black Rock Studio also wanted to make the HUD as simple as possible by taking away all unnecessary elements such as the speedometer and the track map (rendered useless due to the dynamic nature of the track) leaving only the lap count, the position that the player is in, and the power play meter, all positioned behind the player's car to avoid detracting from the scenery.

The game also has a multiplayer mode, with both 8-player online and 2-player split-screen offline available.

There are 15 tracks in the standard game, most of which are located in a lifesize set of a city (shown being constructed in the introductory video). Two tracks can be acquired as downloadable content.

A "time savers" DLC pack was released upon the game's launch, which unlocks all cars, tracks and modes without the player having to unlock them by playing through the game's "Season" mode.

The "High Octane Supercar" pack was released on August 31, 2010 as paid DLC, featuring the Cobretti Severus, the Ryback Vulcan, and the Hanzo Katana. In addition, the Elite Vehicle Livery and Ryback Cyclone Special (a stronger, upgraded version of a standard car) packs were released for free.

The next paid download was released as the "Survival at the Rock" pack and included a new Survival mode track (Minepit Park) and a new multiplayer-only mode (Survival Race; a racing variant of the Survival mode). It was released on October 12.

Another vehicle pack, entitled the "Deadline" pack, was released on October 20. The Deadline pack includes three new cars (the Hanzo Kanobo, Cobretti Centaur, and Ryback Javelin) and a new livery for the Ryback Coyote vehicle. Also included is the Deadline mode, a variation of Detonator (a time trial with automatically triggered power plays) where pickups spread across the track can pause the timer.

The final known pack is the "Quarry Onslaught" pack, released to Xbox Live Marketplace on November 2, 2011. Included with this pack is the "Quarry" race course and the "Onslaught" game type. During an Onslaught event, racers are challenged to pull ahead of the competition while the helicopter fires missiles onto the track. Points are awarded based on how close to the front racers are, and the game will end after twenty missile waves.

All the downloadable content, with the exception of the two free addons, is available in Europe as part of the "Ultimate Edition", a complete bundle which also includes the digital version of the game.

Despite positive reviews from critics, the game was a commercial failure. It sold only 86,000 copies in the United States in its first 12 days.