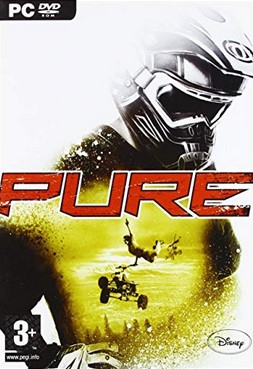 Pure is an off-road, quad-bike trick-racing video game for Xbox 360, PlayStation 3 and Microsoft Windows published by Disney Interactive Studios and developed by Black Rock Studio (formerly Climax Racing, the developers of the MotoGP and ATV Offroad Fury series). The game was announced on February 14, 2008 and was released in North America on September 16, 200 on Windows, PlayStation 3 and Xbox 360, in Europe on September 26, 2008 and in Japan on June 25, 2009. The game incorporates a trick system that rewards the player with speed boosts for successfully pulling off tricks.

Players race with quad bikes in locations across the world, pulling off incredible stunts at extreme heights. There are three different race types:

The game has a trick system that monitors what kind of tricks the player has been showing off. If the player repeats the same trick, it becomes "stale", earning less points, but new tricks are "fresh" and score more points. Tricks add to a player's "thrill bar", with higher-level tricks becoming available as the bar is filled. If the bar is full, the player may perform a "special trick" given a high enough jump. The bar may deplete if boost is used or if the player crashes after an unsuccessful trick.

A demo was released on the PlayStation Network and Xbox Live Marketplace on September 4, 2008. The demo features one level of play. The PC demo was made available on October 2.