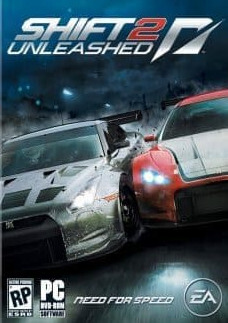 Shift 2: Unleashed features over 145 cars from more than 37 manufacturers and over 36 different tracks, which players can compete in several types of races. Players can also compete online. The game also features three new main additions: an in-helmet camera, night-time racing and the Autolog feature introduced with Need for Speed: Hot Pursuit.

In the career mode, Vaughn Gittin, a Formula D Champion guides the player through his career, customizing the car, Autolog, teaching the player how to drift, so the player would head on to the FIA GT3 and the Works series. Then, he begins to move on to the FIA GT1 Championship. Gittin also will be in the Muscle series. The career mode also features the Formula D driver Darren McNamara in Retro series, Chris Rado in Time Attack and Drag Racing (DLC) series, Eric and Marc Kozeluh in Standing Mile (DLC) series, Mad Mike Whiddett in the Works series, Patrik Söderlund in the FIA GT3 series, Tommy Milner in the endurance series, Matt Powers in the Legends (DLC) series, and Jamie Campbell-Walter in the FIA GT1 series.

As well as an in-car camera view, Shift 2 includes a 'helmet-camera' in which the player's viewpoint is from their driver. The helmet cam moves with the head of the driver, being drawn from side to side as the car takes corners and jerking forward when the player crashes. As the car comes up to higher speeds, the edges of the screen will become blurred to simulate the tunnel-vision effect that drivers suffer when racing. Shift 2's night racing also appears to be more advanced, with headlights dimming or turning off completely if damaged, further narrowing the player's view.

The Autolog system is now 'Need for Speed DNA'. The system appears in Shift 2 in a more-or-less identical design to the original, but includes extra features that they not only provide track times for unique events, but also segregate data based on quick race tracks, race types and automotive disciplines. This essentially means that Autolog is more than just a system that simply displays player friend’s times regardless of how, or when, they set them during their career.

Shift 2 features more than 140 licensed vehicles available for racing and tuning, a smaller number compared with racing sims such as Forza Motorsport 4, and the 1200 cars found in Gran Turismo 6. However, executive producer Marcus Nilsson said the studio wanted to concentrate on having only the must-have speedsters. There are also 40 real-world locations including Bathurst, Spa-Francorchamps and Suzuka as well as fictional circuits like downtown London and Shanghai.

Lead designer Andy Tutor confirmed that Shift 2 doesn't feature split-screen, saying, "There’s so much going on in the game, for example we’ve added if you’re drafting a guy now you’ll get all the little bits of crap from his car, all the gravel and rubber hit the car and they can hit your windscreen and things like that. It takes a lot of development time but it’s very authentic and that’s the experience we want. Unfortunately that means things like split-screen aren’t possible."

GameTrailers rated the game an 8.9/10, saying how it "Refines the strengths of the first game and extends their value indefinitely through the competitive environment of autolog. There aren't any breakthrough new features here, but this is a racer that will constantly push you to improve and make you sweat under the pressure."

It gained an 8/10 rating from Eurogamer, stating: "As an update to the previous SHIFT title, Unleashed is a significant draft forward. While the driving itself retains the boisterous character of its predecessor, there's been a considerable tightening of focus in the experience system, which makes every race feel meaningful whether you win or lose."

It gained a 7.5/10 rating from GameSpot, stating how "Shift 2 may not offer full-on simulation features, but it boasts roller-coaster thrills and a deep sense of immersion in the hectic world of racing."

The game reached number 3 in the UK sales chart.