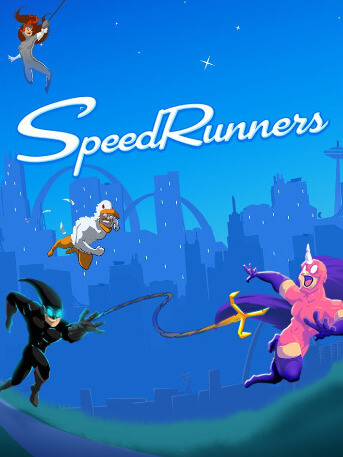 SpeedRunners is a multiplayer side-scrolling racing game developed by DoubleDutch Games and published by tinyBuild. Originally a free web browser game titled SpeedRunner and later an Xbox 360 game by the name SpeedRunner HD on Xbox Live Arcade, SpeedRunners was released on Steam on 26 August 2013 into Steam Early Access, and as a full game on 19 April 2016. SpeedRunners was released on Xbox One in June 2017 as a Games with Gold title. A Nintendo Switch version will be released at a later date. It was recognized as an eSport by the Electronic Sports League in July 2015. However, due to decreasing activity the SpeedRunners section was ended on 28 August 2016 when the final community cup was held.

SpeedRunners is played as a fast-paced side-scroller. Players compete with each other to outrun their opponents using grappling hooks, power-ups and interactive environments. The screen moves with whatever player is currently in the lead. Falling behind far enough off the screen results in players dying to the players who still remain on-screen. As the player progresses they earn experience based on their performance. Getting enough experience points causes the player to level up which unlocks new power-ups, levels, characters, and skins.

SpeedRunners won the Gamer's Voice Award in the 2015 SXSW Gaming Award, the 2014 Best Multiplayer Game Award by Indie DB, and was nominated for Best PC/Console Game at the 2012 Dutch Game Awards.