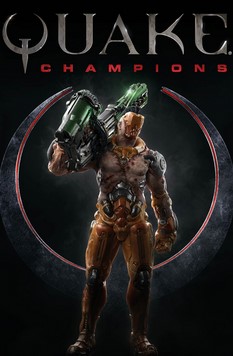 Quake Champions was announced at the Electronic Entertainment Expo 2016, alongside a debut trailer. It will feature a large quantity of playable characters, each boasting their own sets of unique skills. The game is promised to be a "fast paced arena based shooter". It will not be released on consoles due to hardware limitations.

At QuakeCon 2016, creative-director Tim Willits revealed that Quake Champions does not run on the id Tech 6 game engine, but instead works on a hybrid engine made up of id tech and Saber tech, which means a number of the features seen in Doom are not native to Quake Champions, such as virtual reality, Vulkan API, SnapMaps and mod support, although mod support is potentially planned after initial release. It was revealed that Quake Champions was originally considered as an expansion to Quake Live, a revamped version of Quake III Arena released in 2010. The game went into closed beta on April 6, 2017. The game was released onto Steam's early access program on August 23, 2017.citation needed

It is stated that the game would feature a free-to-play option, allowing players to play as Ranger, with additional characters available for purchase, similar to the model used in Killer Instinct.

At E3 2017 it was announced that B.J. Blazkowicz of the Wolfenstein series would be a playable character.

In August, the Doom Slayer from the 2016 video game Doom was confirmed as a playable character, after previously appearing in 1999's Quake III Arena and 2010's Quake Live as Doomguy.citation needed

At E3 2018, Bethesda announced the availability of a free-to-play trial that is downloadable on Steam. Players who sign up during the free trial period will be able to keep playing for free after the game launch. Early access to the game is available for purchase at $30 on Steam.

Andrew Hulshult announced on his Twitter that he will be composing new music for the game. Hulshult previously composed music for the modification Brutal Doom and Apogee Software titles like 2013's Rise of the Triad and 3D Realms' Bombshell.

In Quakecon 2018, Bethesda announced that Quake Champions would be made free-to-play and open to all players on August 10, 2018. At launch, the game supported the free-to-play model with loot boxes containing random cosmetic items, but transitioned to a battle pass model in December 2018, with players earning "shards" from weekly challenges to unlock new cosmetics.