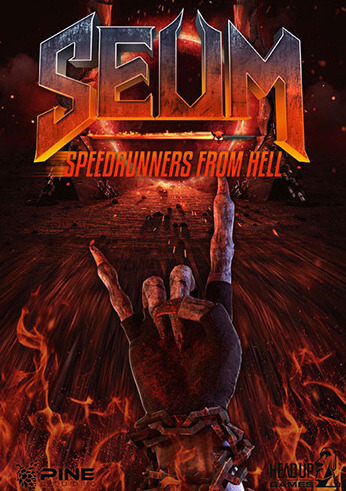 SEUM: Speedrunners from Hell is an independent video game developed by Pine Studio and published by Headup Games. It was released on Steam in July 2016, on Xbox One in September 2017, on PlayStation 4 in October 2017 and onto GOG.com on October 12, 2018. It is a first person platformer where you race against time using a variety of power-ups, inspired by speedrunning sessions in games like Quake or Super Meat Boy. The name "SEUM" was derived from ColloSEUM, the working title of the game.

"Marty was having a late morning breakfast and minding his own business. The demon knocking on the door wasn’t part of his morning routine. Before Marty was able to open, the hell breed smashed in the doors. A fierce brawl commenced and Marty lost his right arm – but at least the demon also lost his head. Unfortunately, whilst the brawl erupted more demons entered his garage and stole his last batch of limited edition Walrus Ale (tm). Now Marty has become furious! He ripped off the demon’s arm and did some DIY to re-attach his arm back to himself. This demon is no looker but gee it casts some nasty fireballs. Marty’s (after)life now has a single purpose: Go to hell and get his beer back! \m/ "

The game received mixed to positive reviews. It currently holds and aggregated score of 77/100 on Metacritic for Xbox One.