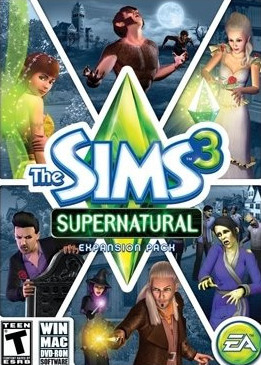 The Sims 3: Supernatural is the seventh expansion pack for The Sims 3 on OS X and PC. It was released on September 4, 2012 in North America and Greece.

Players can create supernatural (non-human) Sims such as witches, wizards, werewolves, zombies, vampires (updated), ghosts (in which they may choose how the sim "died"), fairies, and if Showtime is installed, Genies. Each have their own magical abilities, traits, and interactions. Supernatural comes with a new world called Moonlight Falls. Sims can learn the new alchemy skill which teaches Sims how to brew different potions and elixirs with certain ingredients. Sims also learn new spells which can be used to either charm or hex other Sims. New objects include a broomstick, a gypsy caravan, a magic mirror, and a sliding bookcase door. Most of the objects have a gothic theme. Bonehilda, a skeleton non-player character, returns from The Sims: Makin' Magic. Sims can also turn into zombies using a 'zombification potion'. The six new traits included are Supernatural Skeptic, Supernatural Fan, Night Owl, Brooding, Gatherer and Proper.

Supernatural comes in a regular edition, limited edition, and Origin edition. The limited edition includes exclusive items from the game Plants vs. Zombies; a peashooter, a ripped zombie suit outfit, a newspaper suit zombie outfit, and cone and bucket hats. Players who pre-ordered the game from Origin received an exclusive Origin Plants Vs. Zombies set that included a plantern lamp, a wall-nut sculpture, a zombie gnome sculpture, and a brains flag sculpture. Players who registered their game received a Plants Vs. Zombies poster and T-shirt from The Sims 3 Store.

Jon Michael of IGN gave the game 4.5 out of 10 criticizing the repetitive additions and useless spells in the game, as well as a bug that will let the zombies appear every night in the game if the player will save it at night. Leif Johnson of GameSpot on the other hand, praised the expansion for its new career and skills while Abigail Holden of Lazygamer.net raised its updated Create-A-Sim feature which allows now to create 6 new "races": Fairy, genie, ghost, vampire, witch, and a werewolf. WorthPlaying wasn't shy of giving the game a 9.3 out of 10 praising its new Night Owl trait among other things.