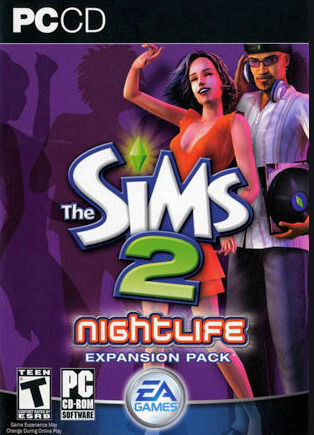 The Sims 2: Nightlife is the second expansion pack for The Sims 2, which was released on September 13, 2005 (USA and Canada) and September 16, 2005 (European Union, Australia and New Zealand). It was released for Mac OS X on March 27, 2006. The expansion pack centers on the new downtown area, which has various activities, such as bowling, karaoke, dining and dancing, as well as a photo booth, and includes a dating minigame which allows player to engage in their Sims' relationships in greater depth. Most elements from this expansion were incorporated into The Sims 3: Late Night for The Sims 3.

The game is reminiscent of an expansion pack from the original The Sims game entitled The Sims: Hot Date, which focused on new social interactions and locations for Sims to visit, such as a dance club or romantic restaurant. Nightlife follows in a similar theme. Some of the items are also similar to the ones found in The Sims: House Party and The Sims: Superstar.

New additions include inventories, new interactions, and over 125 new objects, including cars. NPCs that a player's Sim dates can now leave gifts or hate letters at the Sim's home, depending on the success of particular dates. Some of the new NPCs include party DJs, a Gypsy Matchmaker and Vampires.

Nightlife also adds a new aspiration called the Pleasure Aspiration. This new aspiration is assigned in exactly the same way as any of the other five aspirations. Sims with this aspiration crave enjoyment in many different ways, whilst they fear embarrassment. Sims may receive wants such as 'juggle' and 'jump on lounge'.

In Nightlife, players can own their own cars instead of relying on the carpool to get to work or the bus to get to school. There are several models and colors available. In addition, driveways and garages can be built into the Sim's lot. Also new, more customized swimming pools can be designed. Included is a new diagonal shaped swimming pool tool, which can be used to create extensive shapes. However, the pool ladder and diving board may only be attached to pool tiles square on the lot.

The lot mode has been expanded in Nightlife, so that it is possible to view the neighborhood from a lot. Players may leave one lot to play another without having to go back to the neighborhood mode. Two new radio stations come with the expansion, Oldies and Classical stations.

Nightlife adds the option to add a downtown sub-neighborhood to each proper neighborhood. The pre-made downtown is simply called Downtown, and contains several shops, restaurants, nightclubs and other community lots, as well as home lots. These places are perfect for dates, or group gatherings. It does not include pre-made Sims, though.

The Sims 2: Nightlife introduces the concept of fury. Of limited duration, this generally affects which social interactions are accepted. It is most likely to occur when a spouse is caught cheating with another Sim. If another Sim becomes furious at the player's Sim, their Sim will be subjected to vandalism, such as having their newspaper stolen, or their trash can kicked over. Fury can also be caused by the player, if he/she decides to be very mean to the other Sim. Fury can be resolved by waiting for the furious timer to stop ticking or paying the sim. The Seasons expansion pack allows fury to be eliminated by the consumption of strawberry juice.

The Sims 2: Nightlife introduces NPC Vampires. If a Sim builds a strong relationship with a vampire, which they can meet in community lots, they can ask to be bitten and thus, become stricken with Vampirisim. Vampires have sharp teeth, red eyes, and pale skin, have no reflection in mirrors, and can turn into a bat and fly. Vampires' needs do not decay at all during the night, allowing them to enjoy the nightlife that little bit more and making socializing and money making at night that little bit easier. Vampire Sims are also immortal and will not age, although Teen vampires will age if sent to college and again upon graduation.

The Sims 2: Nightlife is the first expansion pack that includes private cars. The expansion pack includes 5 car models with different paintjobs such as: a hatchback, a pickup truck, a minivan, a sedan car, and a sports car. The player can install an alarm in the car, take the kids to school, drive to work, and go to community lots. The official website has included a garage set that allows players with any combination of games to have cars plus the Ford car company has made some of their cars available to The Sims 2 Nightlife owners through The Sims 2 Website.

The Sims 2: Nightlife received a "Platinum" sales award from the Entertainment and Leisure Software Publishers Association (ELSPA), indicating sales of at least 300,000 copies in the United Kingdom.

Nightlife had received 76% from aggregate sites GameRankings and Metacritic respectively.