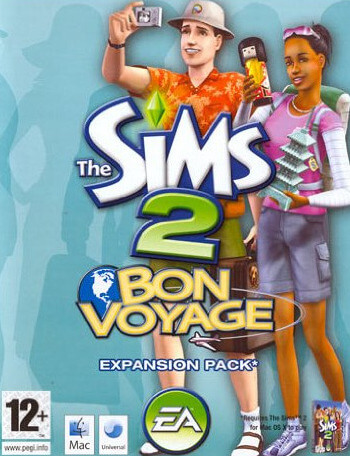 There are three vacation destinations in Bon Voyage: Three Lakes (the mountain woodland), Takemizu Village (the Far East) and Twikkii Island (the beach). The player can choose to take a single Sim, or a group on a vacation to one of these areas. While on vacation, Sims do not have to work or go to school.

Each destination has its own secret lot which can be found by getting a secret map. One of the ways a player can get a map is by digging on terrain. Players can also create custom destinations or buy vacation homes. There are many new NPCs including ninjas, pirates, fire dancers, local chefs, various hotel staff, etc. Sims can learn different things such as dances, massage and gestures from the locals at vacation destinations.

There are also tours that Sims can go on. Random chance cards can be answered which determine the outcome of the tour. There are also several souvenirs that Sims can buy that are different for each vacation destination. The new oddity in The Sims 2: Bon Voyage is Bigfoot, and he is able to move in with Sims. After returning home from a successful vacation, a Sim may receive some temporary vacation bonuses, like an extra want, or improved job performance. A less successful vacation might cause jet lag instead. An option called "Real Estate" can be selected and the Sim can purchase a Vacation Home in the destination of their choice.

Beaches provide a new range of Sim interactions like "comb for shells" or "build a sand castle", or even "get in" to swim in the ocean, and "sunbathe", which can tan or burn the Sim. Players can also place beaches at a neighborhood. Some hotels are placed on beaches. Players may also discover a secret lot, with the usage of a secret map.

The second available area is the Woodlands, which is similar to a campground. Sims may camp in a tent or stay at a wooden lodge. The Sims may also sit around a campfire or go log riding. Sims who find a secret map may discover the secret of Bigfoot while visiting the "secret lot".

The Far East allows Sims to experience Eastern culture. In the Far East location, Sims may play mahjong, get massages and drink tea at special tables. Sims may even see a ninja and may learn the art of teleportation. They may meet some of the locals and learn how to bow from them. A secret lot is also available here.

Two new types of roofs are included; they are pagodas and curved edge roof. There are also Asian-style windows, doors and wallpaper. Some new objects include hotel theme object sets, massage table, hot springs, tropical, mountain and far east foliage, etc. The sauna, tent and hammock are new objects. There are also several new hairstyles and clothes that include kimonos, swimming gear and hula skirts. Sims may also acquire jewelry like watches, earrings, nose piercings and bracelets during Create-A-Sim and on vacation. Each vacation place give Sims new jewelry that they can set to their different outfits. With the expansion pack "Apartment Life" players can put apartments in the vacation locations, instead of a vacation home. You also get new cars which are called Snogo Mini Car, The Jamire, Nigford Mini and a bicuwic.

Sims can take snapshots or movies on vacation. The player may also walk to other lots instead of driving or calling a cab. The new radio stations from this pack include: Local music, World music, Big Band, and Vacation themed music. It is also possible to create community lot chapels, for marriages and to create hotels for Sims.