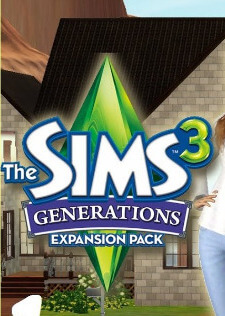 In The Sims 3: Generations, each life phase has a theme. For children, imagination is the theme. For teens, rebellious, chaotic scenes such as parties while parents are out on vacation and pranks are an addition. As a young adult and adult, the focus is on their relationships with others; from getting married to having children of their own. Elders get to enjoy their time reminiscing about the golden years and the joys of watching their grandchildren grow up. Generations is one of two expansion packs (the other being Seasons) to come without a new town for Sims to explore. Players can now add body hair to males in Create a Sim. Two new traits come with Generations. The first is the rebellious trait, while the second is the nurturing trait. Sims with the rebellious trait can make trouble pulling off various pranks, such as doorbell ditching, adding hair dye to their sibling's shampoo, and making the toilet explode. Sims with the nurturing trait are better at taking care of kids and can punish naughty Sims by giving them timeouts, banning video games, and grounding them. The player can now enroll child Sims in after-school activities. The two available for children are ballet and scouts. Teenagers can join up to two High School clubs including the sports team, drama club, debate team, school band, and student newspaper.

On April 5, 2011, EA confirmed the rumors with a press release and a game trailer on The Sims 3 Official YouTube Channel.