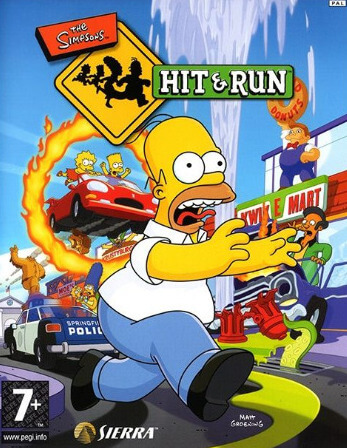 The Simpsons: Hit & Run is an action-adventure video game developed by Radical Entertainment and published by Vivendi Universal Games, for GameCube, PlayStation 2, Xbox and Microsoft Windows. It is based on the American animated sitcom The Simpsons, and is the twenty-second installment in the Simpsons series of video games. It was released on September 16, 2003 for GameCube, PlayStation 2 and Xbox. It was ported to Microsoft Windows two months later.

The game follows the Simpson family and their friend Apu Nahasapeemapetilon, who witness many strange incidents that occur in Springfield; security cameras, mysterious vans, crop circles, and a "new and improved" flavor of the popular soft drink Buzz Cola, which causes insanity. Taking matters into their own hands, they discover numerous shocking secrets, and soon realize these incidents are part of a larger alien conspiracy, caused by Kang and Kodos. Gameplay largely focuses on exploration and missions; players often race enemies and interact with supporting characters on timed quests. The game also features many elements found in role-playing games, such as a branching storyline and side tasks.

Beginning in early 2002, the development of The Simpsons: Hit & Run was extensive. The team sought to differentiate the game from The Simpsons: Road Rage, deeming their new entry into the franchise required a different direction. The game was heavily inspired by the Grand Theft Auto series, and the development team re-purposed the open-world design and nuanced character development for the game. This encouraged collaboration with the show's writers and cast, who helped craft the story and dialogue.

Upon release, it received positive reviews from video game critics, with praise particularly focused on the interpretation of The Simpsons television series as a video game, its parodical take on Grand Theft Auto III, and graphics, while criticism mostly surrounded some aspects of gameplay, such as bugs and glitches. It is generally considered to be the best Simpsons tie-in game and has gained a cult following. The game was also a commercial success, with recorded sales of over 3 million worldwide. It received the award for Fave Video Game at the 2004 Nickelodeon Australian Kids' Choice Awards. On the PlayStation 2, GameCube and Xbox, it earned Greatest Hits, Player's Choice and Platinum Hits respectively.

The Simpsons: Hit & Run has seven levels, each with missions and a sub-plot. The player can control one specific character in each level. The game's playable characters are Homer, Bart, Lisa, Marge, and Apu, with Homer and Bart being playable twice each. When travelling on foot, the player character can walk, jump, run, and perform three types of melee attacks: a normal kick, a jumping kick, and a smashing move. To drive, the player can either hitchhike and control the driver in one of the many civilian vehicles that drive endlessly around town, or use a phone booth to select a car. Several hidden vehicles are present in each level and can also be used by the player if found. The game's driving missions are also similar to those of Grand Theft Auto III. In both games, the player races against other characters, collects items before a timer runs out, and wrecks other cars.

The game has a sandbox-style format that emphasizes driving, and the player controls their character from a third-person view. The character can perform certain acts of violence, such as attacking pedestrians, blowing up vehicles, and destroying the environment. The Simpsons: Hit & Run has a warning meter that indicates when the police will retaliate for bad behaviour. Located in the bottom-right corner of the screen, the circular "hit and run" meter fills up when the character runs people over or destroys objects, and decreases when they cease doing so. When full, several police cars chase the character for the duration of the hit and run. In Level 7, instead of standard police cars, zombie police hearses chase the character.

Each level contains items the player can collect, such as coins, which can be gathered by either smashing Buzz Cola vending machines, Buzz Cola boxes or wasp cameras, the latter of which become more elusive as the game progresses. The coins can be used to buy new cars and player outfits, some of which are required to progress through the game. The player can also collect Itchy and Scratchy cards. By collecting all 49 of them, seven in each level, the player unlocks a special The Itchy & Scratchy Show video. Several events cause the player to lose coins; because the character cannot die, injuries cause the player to lose coins. If the player is apprehended during a hit and run, they will be fined 50 coins.

Mysterious happenings are occurring in Springfield; a horde of robot wasps descend upon the city at the beginning of the game. After a tractor beam abducts Bart outside a stadium, Lisa attempts to find her brother by exploring the town for clues. She learns that the black sedans that have been appearing around town are connected to Bart's disappearance. Lisa eventually finds Bart on a ship in Springfield harbor. He appears to have memory loss and is mumbling unintelligibly while occasionally mentioning the sedans and Buzz Cola, the "new and improved" cola drink recently launched by television personality Krusty the Clown. Marge sets out to learn what has affected Bart. As she investigates a crop circle that recently appeared in Cletus Spuckler' crop field, Abraham Simpson tells Marge that the crop circle is an exact replica of the Buzz Cola logo. Marge gives a can of the cola to Bart, which snaps him out of his stupor. Bart reveals that the Buzz Cola is a mind-control cola produced by aliens. Marge decides to purge Springfield of the cola, but in spite of her valiant efforts, the drink still maintains its popularity.

Inspired by Marge's efforts, Apu tries to discover the source of the cola. He finds out that the cola trucks are registered to the Springfield Museum of Natural History. Apu and Bart decide to go inside the museum, where they find a meteor as the source of the cola. They eavesdrop on a conversation between aliens Kang and Kodos, who are masterminding a scheme. Apu and Bart learn that the wasp cameras are filming the antics of Springfield for an intergalactic reality show, Foolish Earthlings. The aliens are using the cola to make people insane, by which time Kang and Kodos will distribute laser guns among the populace to drive the town to a violent massacre sure to draw many viewers.

Apu is frightened of the aliens and refuses to help any further, so Bart takes it upon himself to foil Kang and Kodos' plan. He asks Krusty for help, but Krusty informs Bart that he has already helped the Duff Brewery set up free laser gun stands around Springfield. Bart then goes to his father, Homer, for help, and the duo quickly pursue Kang and Kodos to the brewery. However, the aliens escape, and before departing, they reveal that they have already released Buzz Cola throughout Springfield's water supply. As the cola seeps into the ground, it releases the un-dead from the Springfield Cemetery, who invade Springfield. When Homer collects supplies to protect his family and home from the marauding zombies, he decides to pursue a black sedan—which he believes belong to the aliens—to the Springfield Nuclear Power Plant. The sedan, however, belongs to Professor Frink, who has discovered the aliens' weakness: nuclear waste. He plans to use the space ship's tractor beam to suck up cars that are loaded with drums of nuclear waste. After successfully loading Frink's car, along with three more, into the aliens' tractor beam, the ship explodes. The following day, Springfield is returned back to normal.