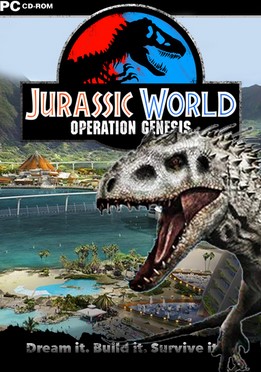 Jurassic Park: Operation Genesis is a construction and management simulation video game based on the Jurassic Park series developed by Blue Tongue Entertainment and co-published by Vivendi Universal Games under their Universal Interactive subsidiary and Konami. It was released for Windows, Xbox, and PlayStation 2. The game's primary goal is to construct a five-star rated dinosaur theme park named Jurassic Park on custom-generated islands by hatching dinosaurs, building attractions, keeping visitors entertained, and ensuring the park's safety.

Development began in 2001, and lasted 22 months. The game was announced in February 2002, with its release initially scheduled for late 2002. Ultimately, the game was released in North America and the PAL region in March 2003, followed by a Japanese release later that year. According to Metacritic, the Windows and Xbox versions received "Mixed or average" reviews, while the PlayStation 2 version received "Generally favorable" reviews.

The player's main objective is to create a theme park/zoo featuring dinosaurs, make it popular, and make it safe with a 5-star rating. Gameplay functions are very similar to the SimCity and Tycoon game models. It is necessary to build feeding stations where herbivores can get bales of plant feed, while carnivores are fed live cows or goats. However, herbivores become unhappy if they don't have enough trees around them or enough nearby dinosaurs to socialize with. Likewise, carnivores have an innate desire to hunt other dinosaurs, so even a constant stream of livestock will not keep them happy.

To create a dinosaur, fifty percent (50%) of the particular dinosaur's DNA is needed. The higher the percentage of DNA, the longer that dinosaur will live, unless it dies by means other than natural causes, such as malnutrition or being attacked by another dinosaur. To obtain a dinosaur's DNA, the player must extract it through fossils or amber. Higher quality specimens will yield more DNA.

To obtain fossils and amber, the player must send a fossil-hunting team to dig in one of nine dig sites around the world. Additional dig teams can be purchased later in the game. Each dig site contains fossils from three particular dinosaurs. Fossils of some dinosaurs, such as Brachiosaurus, can be found in more than one dig site. The chance of finding fossils depends on the quality of the site. There are 6 classifications on the quality of a dig site, ranging from "excellent" to "exhausted." It is still possible to find fossils and amber at sites that have been exhausted, although they are often of low quality with little DNA to provide. Valuable items such as silver, gold, or opal are also discovered infrequently by the dig team(s), and can be sold for profit.

Attractions help make the park popular, and increase its rating power and income when correctly configured. Attractions must be researched before they can be constructed, and include the Balloon Tour, Safari Adventure and Viewing Dome. Viewing Vents and Viewing Platforms do not need to be researched. The Safari Tour and Balloon Tour attractions allow for the player to "take over" the ride for the purpose of park exploration and photography, but only when a visitor in the game is using it. The player may also observe the dinosaurs from the Viewing Dome, Viewing Vent, and Viewing Platform by selecting the "View" option after clicking on the building.

Amenities such as restrooms and restaurants are needed for visitors. Additional buildings such as a gift shop and a resting area must be researched before the player can add them into the park. Vaccines for diseases–such as tick infestation, gastric poisoning, rabies (though only mammals are significantly affected by rabies in real life), and the fictional Dino Flu (possibly a nod to bird flu)–must be researched before a sick dinosaur can be treated for a particular illness.

There are a total of 25 dinosaurs featured in the game, some of which were featured in the films. The dinosaurs are divided into four main sub-groups. Small Herbivores such as Gallimimus and Pachycephalosaurus are easy to care for and do not take up much space, but are not as popular with guests. Large Herbivores such as Brachiosaurus and Triceratops are very popular with visitors and do not require expensive fences, but need large spacious exhibits. Small Carnivores such as Dilophosaurus and Velociraptor do not generally need tight security like their larger counterparts, but can still harm guests if they escape. Large Carnivores such as Tyrannosaurus Rex and Spinosaurus are the most popular dinosaurs in the game, but require large exhibits with high security fences and are prone to rampaging when stressed.

All games from the serie "Jurassic Park"

Freddi Fish 5: The Case of the Creature of Coral Cove
hit
upd
new