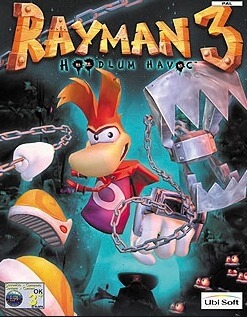 Rayman 3: Hoodlum Havoc is the third major platform game installment in the Rayman series. It tells the story of how Rayman stops André, an evil black lum, from taking over the world with his army of sack-like "Hoodlum" soldiers. Unlike the game's predecessor, Rayman 3 took a more light-hearted turn, it has sarcastic self-referential undertones and pokes fun at the platforming video game genre. It was released for the GameCube, PlayStation 2, Xbox and Microsoft Windows by Ubi Soft in 2003 and OS X by Feral Interactive in 2004. A remastered HD version of the game was released for PlayStation Network and Xbox Live Arcade in 2012. 2D versions were developed for the Game Boy Advance, N-Gage and mobile phones. A follow up game, Rayman: Hoodlums' Revenge, was released for the Game Boy Advance in 2005. This would be the last main series Rayman game to be released until Rayman Origins in 2011. The game is also the latest in the series to be in 3D.

Rayman's controls are similar to that of Rayman 2: The Great Escape, albeit utilising long-ranged punches (and kicks at some opportunities), instead of throwing Energy Spheres. Instead of permanent upgrades to his abilities, Rayman can now find special "Laser Detergent" cans (used by the Hoodlums to turn their clothes into combat fatigues) containing one of five temporary power-ups. The Vortex allows Rayman to fire mini-tornadoes instead of punching, the Heavy Metal Fist increases Rayman's strength and allows him to break down certain doors, the Lockjaw gives Rayman extendable claw weapons that can be used to latch onto and electrocute enemies or swing across gaps, the Shock Rocket allows Rayman to fire a remote controlled missile, and the Throttle Copter provides Rayman with a special helmet that allows him to fly vertically for a limited time.

Unlike most entries, Rayman 3 features a scoring system that tallies points based on Rayman's actions. Whenever points are scored, the system switches to a "Combo mode" that adds even more points acquired from such actions, though if the player's scoring stops after a few seconds, the Combo mode ends as well. If using a power-up acquired from a Laser Detergent, points earned are doubled. Points earned can unlock hidden content and, in some levels, allow access to hidden areas.

One night, a Black Lum, who was supposedly said to have grown out of pure evil, named André appears, and transforms other Red Lums into Black Lums to join him. The group eventually gains enough hair from various animals throughout the forest to dress themselves as Hoodlums. In the middle of the process, Murfy, one of the residents and workers of the Fairy Council, discovers them. André later discovers him hiding nearby and begins to pursue him. Murfy is eventually chased to a small clearing, where Rayman and his friend Globox are sound asleep. Just as Murfy reaches them, Globox is awakened by the commotion. Now aware of the situation, Globox helps Murfy to try to get Rayman, who is still asleep, to safety. In the process, Globox accidentally removes Rayman's hands, forcing Murfy to pick Rayman up by his hair and fly him away from the clearing himself. In an attempt to save himself, Globox runs away to safety, taking Rayman's hands along with him.

As time passes, more and more Hoodlums invade the forest. After Rayman wakes up, he and Murfy reach the entrance to the Council and discover Globox hiding in a barrel. Just as Rayman gets his hands back from Globox, André and a few of his minions appear, following Globox as he flees into the Council. As Rayman and Murfy pursue them, they learn of André's evil plan: to taint the heart of the world so that he can create an army of Hoodlums. Eventually, André catches up with Globox, who ends up accidentally swallowing the evil creature. Afterwards, Rayman attempts to seek out a doctor that can rid André from Globox's insides and Murfy departs from the team, warning Rayman that the Black Lum may force Globox to drink plum juice, in spite of the latter's allergy to it. Rayman meets up with three doctors: Otto Psi (a play on the word autopsy), Romeo Patti (homeopathy), and Art Rytus (arthritis). After all three doctors attempt to independently purge André by using various parts of Globox's body as musical instruments, they succeed in getting rid of him after collaborating in Art Rytus' clinic room. Refusing to admit defeat, André teams up with Reflux, a member of the Knaaren race that Rayman had previously defeated.

Reflux steals the scepter of the Leptys – a god worshiped by his people – from the child king of the Knaaren and uses it to increase his power, which in turn will allow Andre to infinitely reproduce. With Globox's help, Rayman climbs to the top of the Tower of the Leptys and faces Reflux and André as the former transforms into a giant winged monster. After a prolonged battle, Rayman and Globox destroy Reflux and Rayman turns André back into a Red Lum. Shortly thereafter, Rayman and Globox return to the clearing that they were in before. Before they resume their nap, Globox admits that he misses André and would like him back, but Rayman says that's not a good idea and that he doesn't know how. Globox says that a Red Lum has to be scared to be a Black Lum to which Rayman replies that he would hate to imagine what could scare a Lum. A flashback to before the beginning of the game reveals that Rayman unwittingly created André when his hands went off on their own and scared a Red Lum with frightening shadow puppets.

By the end of March 2003, Rayman 3: Hoodlum Havoc had sold more than 1 million copies.