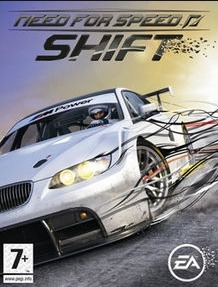 Need for Speed: Shift is the thirteenth installment and second reboot of the racing video game franchise Need for Speed. It was developed by Slightly Mad Studios in conjunction with EA Bright Light and published by Electronic Arts for Microsoft Windows, PlayStation 3, Xbox 360, PlayStation Portable, Android, iOS, Symbian, Windows Mobile, MeeGo and J2ME in 2009. In the new franchising model for the series adopted by EA, Shift takes its place focusing on simulation/arcade racing rather than the arcade racing of previous titles in the series. Shift was followed by a sequel, Shift 2: Unleashed, in 2011.

Aimed at a hardcore gamer-style audience, Shift reverts to the touring-car simulation style of its 2007 predecessor, Need for Speed: ProStreet. Although the gameplay of these two titles are similar, Shift recreates car handling much more realistically than its predecessor, and does not contain a story. Upon starting the career mode, the player performs two laps around the Brands Hatch racecourse to determine his or her skill. Once completed, the player is welcomed to the 'NFS Live World Series', and must earn stars in races to earn money, and unlock new races and tiers.

G-force plays an important role in the game, as it affects both the player and the AI. The in-car view also returns, making its first appearance in a Need for Speed game since Porsche Unleashed. The in-car view is highly detailed, and it is possible to see the driver changing gears and moving his head to get a better view of the mirror. The crashes affect the player's visuals. While crashing, there is a temporary blur on screen. The sound aspect have detailed car crash sound, as well as a sharp gasp of breath from the driver before a collision.

There are 60+ cars which are divided into 4 tiers. Tier 1 refers to entry-level sports and luxury cars like the Audi TT and Infiniti G35, tier 2 refers to mid-level performance cars like the BMW M3, tier 3 refers to supercars like the Lamborghini Gallardo and tier 4 refers to hypercars like the Bugatti Veyron, or Pagani Zonda R. The car customization options include cosmetics as well as performance mods and is more in depth than previous titles, affecting aspects such as alignment, aerodynamics, tires, brakes, differential, and gears. Nitrous is also an option for tuning, but different from previous Need for Speed titles as it is simulated more realistically. There are body kits which affect the aerodynamics and weight reduction. There are visual customization options like rims, vinyls and paints.

The PlayStation Portable of the game offers local, ad hoc multiplayer, with no online multiplayer support.

In addition to the standard edition, a "Special Edition" of the game has been released exclusive to Europe. The Special Edition features numerous bonuses over the standard edition, including exclusive packaging, a poster of the game, and an unlockable car and race which are redeemable online. Shift was released as a bundle with the PlayStation 3 Slim 250GB to promote the game in Europe.

IGN awarded it 9 out of 10 citing among other things an incredible driving experience and excellent sound effects, IGN also gave it an Editors' Choice award. Official Xbox Magazine awarded Shift with 9/10 saying that it has an outstanding driver’s view; a deep, addictive career mode with lots of variety and options; sharp multiplayer racing counts toward single-player career. Official Xbox Magazine has also nominated it for editors choice award. Eurogamer gave it a 7/10, saying, "If the skittish handling and overbearing, messy advancement can be reined in, Need for Speed could have a future in its newly serious and somewhat crowded surroundings. But with the infinitely more comprehensive Forza Motorsport 3 and Gran Turismo 5 looming in the very near distance, it's hard to see the point in this second-stringer this time around, for console players at least. And given Need for Speed's recent, confused history, you shouldn't count on it wearing the same face next year."