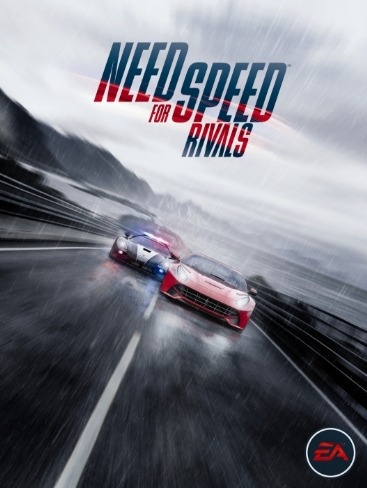 Need for Speed Rivals is a racing video game developed in a collaboration between Ghost Games and Criterion Games, and published by Electronic Arts. It is the twentieth installment in the Need for Speed series. The game was released for Microsoft Windows, PlayStation 3, PlayStation 4, Xbox 360 and Xbox One in November 2013.

Need for Speed Rivals is a racing game and features gameplay similar to earlier Need for Speed titles, such as Need for Speed: Most Wanted and Need for Speed: Hot Pursuit. Players take on the role of a Racer or Cop, with each side of the law offering its own play style. Rivals features eleven upgradeable gadgets such as EMPs, shockwaves, spike strips, and the ability to call in roadblocks. The game takes place in a fictional location known as Redview County. The open world environment features a similar set-up to Most Wanted, with several jumps, speed traps, and unlockable cars, as well as shortcuts that are not shown on the map.

Rivals features a career progression system for both Cop and Racer. Progression is made by means of Speedlists for Racer and Assignments for Cop, which are sets of objectives which involve dangerous driving, maneuvers, and race standings. When the player completes a set of objectives, the player levels up and unlocks new content, and is presented with another set of objectives to choose from.

The Autolog system, a competition-between-friends system, developed by Criterion for Hot Pursuit, lets an Assignment or Speedlist to other players' times and posts them to a Speed Wall for local and global leaderboards.

Rivals features a new social system called the AllDrive, which allows players to transition from playing alone, to playing with friends, described as "destroying the line between single player and multiplayer". This allows players to engage in co-op gameplay as well as play against each other. The game also features a dynamic weather system, which makes "the world feel alive in a much bigger sense than any other Need for Speed game".

Rivals also takes on some gameplay styles of earlier Underground titles in the franchise with cues on aesthetic vehicle personalization, such as paint jobs, decals, rims and license plates and liveries can be modified, as well as vehicle performance, and various 'Pursuit Tech' gadgets. With the exception for the Aston Martin Vanquish (and most DLC cars), all vehicles in the game are only available in either the racer or the police variant.

After the commercial and critical success of 2010's Need for Speed: Hot Pursuit, Criterion Games executives stated that they wanted to draw from the series' roots and re-introduce old Need for Speed ideals. However, in 2011, EA Black Box released Need for Speed: The Run, which received mixed reviews.improper synthesis? In 2012, EA Labels president Frank Gibeau said that although he was proud of the Black Box-developed installment, "he didn't want a 60, I want an 80+". On the subject of EA Black Box, Gibeau said the publisher would not be changing its alternating studio strategy. At Electronic Entertainment Expo 2012, Criterion vice president Alex Ward announced that the days of random developers churning out yearly Need for Speed installments were over. Ward would not confirm that all Need for Speed titles for the future would be developed wholly by Criterion, but did say that the studio would have "strong involvement" in them.

With EA Canada and Black Box restructured and refocused towards online and free-to-play games in February 2012, EA had already formed a new studio in 2011, EA Gothenburg. Based in Gothenburg, Sweden, it was reported that the studio would focus on development games using the Frostbite game engine. Also reported was that the studio was developing a game "in the Need For Speed franchise". According to the CVs of employees, much of the studio's staff had worked previously on major racing titles, including Forza Horizon, Need for Speed: The Run, Project Gotham Racing and Race Pro. On 22 October 2012, the series main developer Criterion Games confirmed that EA Gothenburg was working on a title in the Need for Speed franchise, but did not reveal the level of involvement or when the title would be released. On 15 November 2012, EA Gothenburg was rebranded as Ghost Games. Ghost's website went live around the same time and called for potential staff to apply for a range of open positions.

On 23 May 2013, EA confirmed their next Need for Speed game, Rivals, with a teaser trailer, following marketing material tease days before. It was also confirmed that Rivals was in the works at EA's Swedish games developer Ghost Games in partnership with Criterion Games. Ghost is headed up by former DICE executive producer Marcus Nilsson, who previously led development on games including Battlefield 2: Modern Combat, Battlefield 2142 and Shift 2: Unleashed.

Rivals uses the Frostbite 3 engine. The development team opted to target 30fps across all platforms instead of 60fps, because of the AllDrive feature. AllDrive is the system used to seamlessly matchmake players within the same open world. Another reason was due to the number of players able to be in the same world at the same time. The team asserted that while Rivals will be released on both current and next-gen systems, the versions would "ultimately be the same", aside from the graphics would look different, and next-gen would provide for more dynamic weather and gameplay. Rivals is the first cross-platform next-gen games to achieve a native 1080p across both PlayStation 4 and Xbox One. Talk of resolutions and frame rates became a major point of contention between Sony and Microsoft's new consoles after it emerged that both Call of Duty: Ghosts and Battlefield 4 run at a higher resolution on Sony's PS4 console as compared to Microsoft's Xbox One.

On 30 August 2013, Ghost Games head Marcus Nilsson stated that the studio had been given complete charge of the Need for Speed franchise and that the franchise being bounced between multiple EA studios was not "consistent" with different game types. On 16 September 2013, Criterion Games had its staff numbers reduced to 17 people total, as the majority of the studio moved over to Ghost Games UK to work with Need for Speed games. Due to this, what remained of Criterion Games began work on a project of their own.

Because of the low sales of Most Wanted on the Wii U and PlayStation Vita, Rivals was not developed for those platforms.

Need for Speed Rivals was well received by critics at E3 2013 and was awarded with "Best Racing Game" from Game Critics Awards. Previewers who had access to Rivals called the game a spiritual successor to 1999's Need for Speed: High Stakes, citing similar gameplay style. Others called it an improved version of Criterion's Hot Pursuit, citing similar gameplay mechanics.