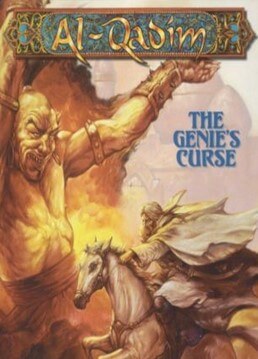 Al-Qadim: The Genie's Curse is an action role-playing game for the personal computer set in the Al-Qadim campaign setting of Advanced Dungeons and Dragons. The game was developed by Cyberlore Studios and published in 1994 by Strategic Simulations. The game combines role-playing game and adventure with a simplified interface; the player's character is a young corsair trying to clear his family's name, rescue his betrothed and determine who has been freeing genies from their masters. The game was released in 2015 on GOG.com with support for Windows, macOS, and Linux.

A genie has been freed from his master's control by mysterious forces which are liberating genies for the Nameless Masters. As the story begins, the player character (the son of sultan Zubin Al-Hazrad of Zaratan) is a young corsair who has just completed his training. The corsair is betrothed to a caliph's daughter. The caliph and his daughter are involved in a hurricane-induced shipwreck, which sweeps the girl overboard. The corsair and his family are blamed for the shipwreck; he must find his bride-to-be and restore his family's honor. The character can interact with his family (including his parents and sister), working to save them from execution; they must also explore the mystery of who has been unleashing genies on the land, and investigate the Genie's Curse.

Unlike the games in SSI's Gold Box series, character generation is greatly simplified. The player chooses a name, by which they are known throughout the game. There is no race, class or skill selection, and play begins immediately. The single player character begins the game as a second-level corsair, whose statistics are predetermined; the player also cannot change his weapons or armor, although he can eventually improve his starting sword. The character earns experience points by solving puzzles and finishing quests, some of which do not involve combat. The character gains levels in exchange for experience points; gaining levels increases hit points, and grants the opportunity to learn new skills for combat.

The game features a simple interface, with icon menus instead of text. Character movement and most object manipulation are mouse-directed, although the player may use a keyboard or joystick. The player chooses all actions (except movement and projectile weapons) by pressing a single action key (or mouse button), which causes the character to automatically take the correct action with an object; the character either automatically picks up important objects or can take the object when the character looks at it. To talk to characters, or attack monsters with the scimitar, the player moves the character towards the target and clicks. The player selects the game's difficulty level of the game, which affects the monsters' power. At the beginning of the game, the player learns to maneuver the character by racing through a trap-filled dungeon hallway. Al-Qadim features simple, real-time combat, with the character using up to two weapons at a time. The character's scimitar can become more powerful with special objects, and his projectile weapon is a sling or magic shards which cast spells. If the character is injured, he can restore his hit points by drinking healing potions or be magically healed when he visits special locations.

The game places less emphasis on role-playing game elements (such as exploration, combat and magic), favoring adventure-game elements (such as problem-solving and object manipulation) and featuring a smaller world to explore. Travel is shown overhead, using ships and flying carpets. The character is visible in three-quarter view, but they and the monsters are shown in side view when moving. In many areas, travel is one-directional. Conversations appear as text, and the player chooses sentences (or phrases) by clicking on them. The game features puzzles and mazes important to plot advancement.