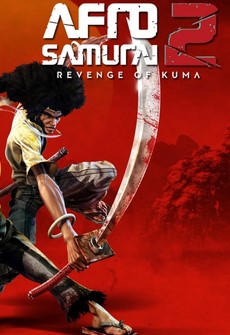 Afro Samurai 2: Revenge of Kuma was a third-person action-adventure video game published by Versus Evil and developed by Redacted Studios. The game was released for the PlayStation Network and Microsoft Windows in September 2015, with an Xbox One version planned for October. The sequel to 2009's Afro Samurai, originally a manga series by Takashi Okazaki, the player controls Kuma, a swordsman who seeks revenge on the titular character.

The game received widely negative reviews from critics. Originally planned to be released in three volumes, Versus Evil removed Revenge of Kuma from all platforms, issued refunds, and cancelled the other two volumes. The Xbox One version was also never released.

The Plot of Afro Samurai 2 is about Kuma trying to fight Afro, the titular character of the anime series. Kuma following his defeat by Afro now seeks to challenge him for the Number One headband and take his revenge.

The game was developed by Redacted Studios and published by Versus Evil. After the release of the first Afro Samurai in 2009, former Namco Bandai senior producer David Robinson left the company, and founded Redacted. Along with leaving Namco Bandai, he secured the rights to make other games in the series.

Afro Samurai 2's story was written by Jim DeFelice, co-writer of American Sniper. The soundtrack to the game was done by rapper RZA, who also produced two soundtrack albums of the animated series. The games still image cutscenes was done by series creator Takashi Okazaki.

The game was released for the PlayStation Network and Microsoft Windows on September 22, 2015. An Xbox One version was also planned to be released on October 9. After the negative reception of the other versions, however, it was never released.

Upon release, Afro Samurai 2: Revenge of Kuma received widely negative reviews from critics and fans of the series.

Polygon called it one of the worst games of 2015. Giant Bomb called it the worst game of the year. It was the second worst-reviewed game of 2015 according to aggregate review website Metacritic.

In November 2015, Afro Samurai 2 was pulled from the PSN and Steam. In an interview with CGMagazine on the games withdrawal, Versus Evil's Steve Escalante called the game "a failure" and announced the cancellation of the other two volumes and refunds for customers. Escalante later expanded on the decision in an interview with Gamasutra, saying, "Given the game quality was not what people were expecting, it didn’t sell like hot cakes, let’s just put it like that."