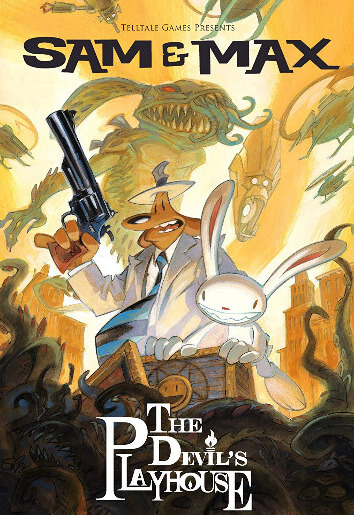 Sam & Max: The Devil's Playhouse is a graphic adventure video game developed by Telltale Games. It is the third "season" of the Sam & Max episodic series created by Telltale Games, following Sam & Max Save the World and Sam & Max Beyond Time and Space. The first episode was released as one of the first apps for the iPad on April 2, 2010, and was released for Microsoft Windows, OS X, and the PlayStation 3 (the first Telltale game to appear on that platform) on April 15, 2010.

Sam & Max: The Devil's Playhouse is a series of graphic adventure games, requiring the user to control Sam and Max to specific locations, interacting with the environment, collecting and using objects, and talking to other characters in the game in order to solve puzzles and complete the game. The previous two seasons of "Sam & Max" have used a traditional point-and-click interface, which is well-suited for Windows and MacOS users but did not translate well to traditional gamepad controls. The game engine for The Devil's Playhouse has been redesigned to handle both the point-and-click scheme and typical console-based controls for third-person perspective games. On a Windows or MacOS computer, the player has the option of plugging in a gamepad to use this second set of controls. Other aspects, such as inventory management, have also been refined to better suit console players or players not familiar with the adventure game genre. The iPad version of the game features direct touch interaction with the characters, scenery, and inventory.

Whereas in previous episodes Max would follow to wherever the player directed Sam, The Devil's Playhouse gives the player direct control over both characters and the ability to swap between characters. This allows for better differentiation between the two characters and increases the variety of gameplay options. A constant theme through the series was a psychic power that Max gained in each episode, such as the ability to read minds, see glimpses of the future or teleport himself to any telephone for which he knows the number. This aspect played into the separate characters' controls in order to solve the puzzles in the game. The PlayStation 3 version of the game features an additional psychic power not present in the other versions.

The game begins with a Twilight Zone-style narrator who tells to the audience that Sam & Max have come to learn of the "Toys of Power"- seemingly harmless toys that Max is able to use to perform various psychic abilities, such as teleportation and precognition. They first use the toys to stop the alien General Skun-ka'pe from destroying the city, who has come to Earth to seek out the Toys himself, and banish him back to the Penal Zone- an interdimensional prison that he escaped previously to the episode. During this mission, the Freelance Police encounter a cult of Mole Men who have been watching over a mysterious artifact called the Devil's Toybox that has been sitting in the basement of Sam and Max's office for quite some time. By watching some dusty film reels, they learn that their great-grandparents, Sameth and Maximus, were chosen by the cryptic Mr. Papierwaite to retrieve the Toybox from the Tomb of Sammun-Mak, an ancient Pharaoh. However, when they successfully recovered it, Papierwaite attempted to use Maximus' psychic powers and the Toybox to summon the Elder God, Yog-Soggoth, and bring about the end of the world. Sameth and Maximus managed to stop Mr. Papierwaite by tricking him into saying the summoning words himself and then tasked the Mole Men of the time with watching the Toybox in the basement under their office building (they were supposed to help, too, but were unintentionally killed by a protection spell).

Just before the last reel is played, Sam goes to the bathroom and returns to find that somebody has stolen Max's brain and the Devil's Toybox. After interrogating several suspects, Sam tracks the brain thief to the Museum of Mostly Natural History, where he temporarily re-animates Max's body by putting the brain of the Pharaoh Sammun-Mak into Max's head. Together, they discover that Skun-ka'pe who has escaped the Penal Zone (after the Toybox was stolen) and that Mr. Papierwaite (who is somehow still alive) are fighting for possession of the Toybox and Max's brain. Seeing Sam, they form a temporary alliance and plan to use Max's brain to recollect the Toys of Power and energize the Toybox. Investigating the museum, Sam witnesses an exchange between Papierwaite and a seemingly invisible being called Dr. Norrington. He also meets the museum security guard Sal, a cockroach, who is working for Mr. Papierwaite who has become the museum's curator. Though Sam is able to break-up the alliance between Skun-ka'pe and Papierwaite, Sammun-Mak in Max's body activates the Toybox and creates an alternate reality where Sammun-mak rules over all. Max, who is still a brain inside a jar, Dr. Norrington and the Mole Cultists are the only ones to remember the previous reality and together, they convince Sam that he must get close to Sammun-Mak and remove his brain from Max's body. After evading both Papierwaite and Skun-ka'pe, Sam removes the mad pharaoh's brain and normal reality is restored. Sam returns Max's brain to his body but they find themselves surrounded by an army of Sam clones, who recover the Toybox and begin a search for the remaining toys.

Taking shelter along with the Stinkies and Skun-ka'pe, who is soon abducted by the clones, at Stinky's Diner, Sam and Max uncover a mysterious cloning chamber underground where the mysterious 'Clone Master' is using the clones to gather the remaining toys of power. They begin a search for the Clone Master and soon meet Mr. Papierwaite and the enigmatic Dr. Norrington who is revealed to be the elder god Yog-Soggoth. The two explain that they were fused together (which made the former immortal) when Sameth and Maximus disrupted Papierwaite's ritual in the past. Yog-Soggoth further explains that the Devil's Toybox is that of his own son, Junior, and if all the Toys are returned to it, Junior will be summoned and bring about the end of the world. Sam and Max learn that Momma Bosco is missing from Boscotech and after calling her back in a seance, she reveals that she was paid handsomely by the Clone Master to supply the technology. Sam and Max help to restore her to life using the cloning machine in exchange for her help. Back in Stinky's Diner, Flint Paper is interrogating Stinky over the mysterious underground passages and exchanges between Stinky and her lover 'Mr. S'. Sam and Max help her escape from the Diner and then follow her to a meeting with Mr. S who is revealed to be Sal. Shortly afterwards, the two fall under the control of the Clone Master but with their indirect help, Sam and Max follow the clones to where the Toybox has been taken. Before they can recover the toy box, they are stopped by Charlie Ho-Tep, an evil ventriloquist dummy and one of the Toys of Power in their possession who reveals himself to be the Clone Master. Sam and Max are captured and taken to the Statue of Liberty where Charlie Ho-Tep plans to complete the ritual to summon Junior in the hope that he will be played with again. With the help of Dr. Norrington and Papierwaite who have also been captured by Charlie, Max unleashes his psychic powers so that he no longer needs the Toys to defeat Charlie and tricks him into destroying the Toybox himself, ending the threat. However, Max accidentally swallows some of the demonic essence left by Junior, causing him to turn into a giant beast. The Giant Monster Max then stomps towards the city, leaving Sam behind, startled and confused. "Well, this is new".