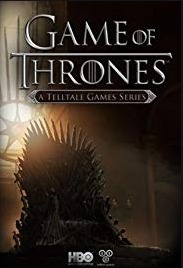 Game of Thrones is an episodic graphic adventure video game based on the TV series of the same name, which in turn, is based on George R. R. Martin's A Song of Ice and Fire fantasy series, released in December 2014 for Android, iOS, Microsoft Windows, OS X, PlayStation 3, PlayStation 4, Xbox 360 and Xbox One.

The game was developed by Telltale Games and follows the episodic format found in other Telltale titles, such as The Walking Dead, The Wolf Among Us and Tales from the Borderlands, where player choices and actions influence later events across the six-episode arc. The story revolves around the northern House Forrester, rulers of Ironrath, whose members, including the five playable characters, attempt to save their family and themselves after ending up on the losing side of the War of the Five Kings. The game includes settings, characters, and voice actors from the novels and TV series.

A second season had been planned but was placed on hold in 2017, amid restructuring issues at Telltale Games, and ultimately was cancelled following Telltale's majority studio closure in September 2018.

After previous video games based on his works received negative or mediocre critical responses, George R. R. Martin opined that he wanted "a Game of Thrones game to be made by a studio that knows how to create a thrilling and interesting story". Telltale Games has found critical success in several licensed adventure games, including their The Wolf Among Us and The Walking Dead episodic video game series. Game of Thrones arose from internal discussions within Telltale of what other popular franchises they wanted to write games around, with much support given for Game of Thrones, considering its emotional equivalence to The Walking Dead. They approached HBO with the concept, and after a year of negotiations, were able to secure the license.

In December 2013, Telltale announced Game of Thrones at the 2013 Spike VGX video game awards program. George R. R. Martin stated that his personal assistant, Ty Corey Franck, is working with Telltale Games as a "story consultant". Telltale's CEO Dan Connors explained that the game will not be a prequel to the television series, that the established world and timeline of Game of Thrones is allowing Telltale to explore fixed stories in more depth, to appeal to players.

Game of Thrones is an episodic point-and-click graphic adventure fantasy drama video game, released as 6 episodes following the model of Telltale's previous adventure games. The player is able to move their character around some scenes, interacting with objects and initiating conversation trees with non-player characters. Choices made by the player influence events in future episodes. The game switches between the viewpoints of five different characters.

Each episode contains five points where the player must make a significant decision, choosing from one of two available options. Through Telltale's servers, the game tracks how many players selected which option and lets the player compare their choices to the rest of the player base. The game can be completed regardless of what choices are made in these situations; the main events of the story, as described below, continue regardless of what choices are made, but the presence and behavior of the non-player characters in later scenes is affected by the choices. The game allows the player to make multiple saves, and includes a "rewind" feature where the player can back up and alter a previous decision, thus facilitating the exploration of alternative choices.

Some scenes are more action-oriented, requiring the player to respond to a series of quick time events. Failure to do these correctly may end the scene with the death of the playable character or another character, but the game will restart at a checkpoint just before that scene to allow the player to try again. In some instances, failure at particular quick time events results in minor game decisions.

The game takes place concurrently with the television series, from the end of the third season until just prior to the start of the fifth season. The story focuses on House Forrester, a family not yet introduced in the television series, but mentioned briefly in the novel A Dance with Dragons. House Forrester hails from Ironrath, a fortress within the Wolfswood forest in the North of Westeros, where they control the valuable Ironwood groves, coveted by many because of the wood's military importance. The game primarily takes place near Ironrath, but also in other locations on the continents of Westeros and Essos.

Throughout the game, the player controls one of 5 family members or servants of the Forresters, with decisions made by one character affecting the others, and the ultimate fate of the house. Thirteen original playable and non-playable characters were created for the game.