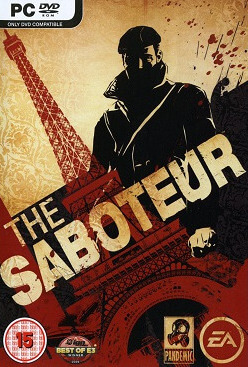 The Saboteur is a 2009 open world action-adventure video game set during World War II in German-occupied France. It was published by Electronic Arts and was the final game developed by Pandemic Studios. The BlackBerry and iOS versions were developed and published by Hands-On Mobile.

The game is set in 1940, and its protagonist, Captain Sean Devlin (based on William Grover-Williams), is a hard drinking Irish racecar mechanic, a regular among the racing groups of Paris. He arrives in Saarbrücken, along with his mentor Vittore Morini, best friend Jules Rousseau and Jules' sister Veronique. Sean is set to race in the Grand Prix, and quickly meets up with his on-again, off-again girlfriend and fellow racer Skylar St. Claire.

He starts a rivalry with Kurt Dierker, an infamous racer and champion of the Nazis. During the race, Dierker cheats by shooting out one of Sean's tires. For revenge, Sean and Jules plan on breaking into the Doppelsieg factory that Dierker works for to sabotage his car, despite Skylar warning them that Dierker is not what he seems. At the factory, Sean and Jules are captured and tortured by Dierker, who reveals himself to be an SS Commandant for the Nazis and believes them to be British spies. Dierker tortures and murders Jules before Sean's eyes, before Sean manages to escape only to witness the Nazis laying waste to the town. Sean manages to rescue Vittore and Veronique before they escape to Paris. Sean tells Jules' family what happened to him, and promises to take revenge on Dierker.

Months later, Sean is living in La Belle Du Nuit, a brothel owned by Jules' family. Sean is approached by Luc Gaudin, a local writer and leader of a resistance group against the Nazi occupation, and Veronique's lover. He talks Sean into joining the resistance, and Sean is tasked with dispatching Nazi operations and killing high-ranking officers. He also gets involved with other resistance leaders and members including Father Denis, a defrocked Catholic priest, Duval Mingle, whose lover betrayed him to a high ranking Nazi, and Margot Bonnaire, who seeks to preserve French culture that the Nazis aim to destroy. Through his work, Sean builds a reputation as a member of the resistance, and eventually Nazi terror squads are set loose in Paris, lead by Dierker, who was put in charge of security, hunting down and killing members of the resistance.

Sean meets up with Skylar again, who reveals herself to be a British spy with the Special Operations Executive (SOE), and she takes Sean to her superiors. They task him with a series of jobs, including stealing an unknown treasure from the Nazis. Sean and Skylar are soon tasked with rescuing a defecting German scientist named Dr. Kessler. It's revealed that the Doppelseig factory is a front for an atomic weapons project that they were forcing Kessler to create. After Kessler is rescued, he refuses to work with anyone unless his daughter Maria is saved as well. Sean soon rescues Maria from her captors and takes her to the resistance headquarters, which is attacked by the Nazis, forcing them to flee to the catacombs. During this raid, Veronique is captured and prepped for execution in Notre Dame, which prompts Sean to rescue her himself.

Luc comes up with a plan to topple the Nazi leadership - who are set to host a race - by having a driver blow them up with a rigged car. While Sean successfully wins the race, and wipes out most of the leadership, Dierker survives and takes control of the remaining Nazis. In retaliation, the Nazis destroy La Belle Du Nuit, killing Veronique's parents, as well as Vittore. Sean races to the catacombs, where the resistance is being attacked by the Nazis. While Sean is successful in fighting them off, the resistance leadership is killed, with Luc being trapped underneath boulders, forcing Veronique to kill him so he doesn't get taken alive. However, Dr. Kessler and Maria are captured once again.

Sean, Veronique and Skylar team up to raid the Doppelseig factory and rescue the Kesslers. Once Dr. Kessler is rescued, he and Sean go on to dismantle the weapons and set the factory to explode before they escape. With the factory destroyed and the Kesslers rescued, Sean and Veronique return to Paris, where the people have risen up against the Nazi power, and Veronique becomes the new leader of the Resistance. Sean tracks down Dierker to the Eiffel Tower, where he is executing his men for failing him. Sean finally confronts Dierker at the top of the tower, where Sean can either shoot Dierker off the tower, or let Dierker jump off himself. With Dierker dead, Veronique asks Sean if it's all over, to which Sean replies he's "Just getting started".

The player can explore Nazi-occupied Paris, some of the French countryside and parts of Germany. Color is a key element in the gameplay. Areas which are heavily controlled by the Nazis are represented in black and white, with the exception of the characters' irises, city lights, blood and blue symbols of the French Resistance, and various German symbols, which are bright red and complete with swastikas. In these areas, German soldiers are present in large numbers, making it far more likely that Sean will be detected in his rebellious activities. To "inspire" that district again, players must weaken the German forces occupying the area. In doing so, that district's citizens regain their hope, visually represented by the area becoming vibrant and full of color. Germans in these areas will not be completely evicted but Sean has a higher chance of escaping them since they will no longer be so ubiquitous, and will primarily be centered on military bases, barracks, checkpoints, HQs, and other strategically important sites. In addition, the French people will play an active role in the struggle for colored zones. For example, if Sean gets into a fight with German soldiers in a colored area, allies like the French Resistance, the Maquis, and even passing French civilians will intervene against the occupiers.

Throughout the game, Sean can upgrade his abilities and arsenal via "Perks", such as improving accuracy with a sniper rifle, ammo count for all weapons, damage, and more. Perks are gained through actions, such as evading high-level alarms, sniping targets or demolishing a set number of German installations or vehicles with a certain requirement. The player also has the ability to scale buildings and run across rooftops, where sometimes British supply boxes can be found, or to reach a good sniper's view of the ground beneath. Garages are available to the player, which can save parked vehicles and repair damaged ones. The player can also engage in fist-fights or use a more stealthy approach, such as sneaking around or using a Nazi's uniform as a disguise.

Should the player die while free-roaming, Sean will lose all of his weapons and grenades he had equipped prior to death. The player can buy weapons, ammunition, explosives, maps and other items from several black market merchants. Once Sean has purchased a weapon from the dealers, he can equip himself with that weapon at any time.

(0) Comments on "The Saboteur Full Version"