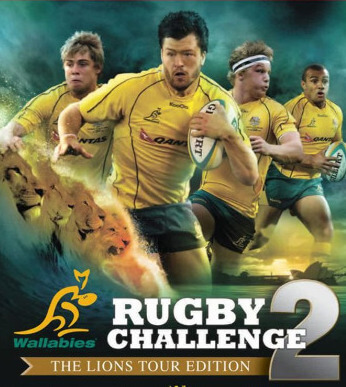 Rugby Challenge 2: The Lions Tour Edition is a Rugby video game, developed by Sidhe and published by Tru Blu Entertainment. This game is the sequel to Rugby Challenge.

The features and content of Rugby Challenge 2: The Lions Tour Edition include:

Refined and expanded gameplay with the addition of quick taps, quick lineouts, mauls from lineouts, interceptions, contesting ball at the breakdown, removing players from the ruck, number 8 scrum pickups, and dynamic in game team strategies on both attack and defence

More options to create or customise players, teams, and competitions, and change game rules and behaviour to shape the game to play how you want and keep the game fresh year after year

Quick taps can now be selected if a penalty is called.

Quick Lineouts can be selected if player catches the ball outside of playing area.

There is now an option to create a maul from a lineout.

Players can contest the ball at a ruck/breakdown.

Players can be removed from a ruck/breakdown.

Number 8's can now pick the ball up from a back of a scrum.

In game strategies are now in the game.

Online Multi-Player (up to four players)

As a tradition in Rugby Challenge titles, players will have the ability to extensively customise the players, teams, and competitions, using the advanced customisation tools. The player will also be able shape the game to his or her own preferences, adding players and teams to the game.

Rugby Challenge 2 received mixed to negative reviews from critics. The Digital Fix gave it 6/10, with Rob Kershaw criticising the poor licensing, repetitive cutscenes and dull commentary, but singled out the Career mode as a major improvement over the first game. NZGamer gave it 7.4/10, noting that it was better than the first game, but not enough to justify the length of time between the titles. The Daily Mail gave it 1/5, criticising the graphics, poor AI and general gameplay.