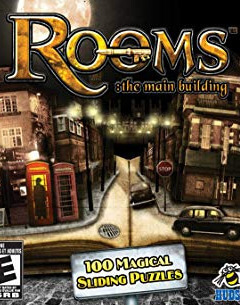 Rooms: The Main Building is a puzzle game by South Korean studio HandMade Game, initially released in 2008 for Windows. The game was released for the Nintendo DS and Wii by Hudson Entertainment on March 23, 2010.

The player moves rooms of a building around to help the game's protagonist reach the exit.

The game was initially developed by independent game studio HandMade Game before being released by Big Fish Games in 2008 and again in 2010 by Hudson Entertainment.

The game has received generally mixed reviews from critics. For instance, Wiiloveit.com gave the game a 25/30, describing it as "truly innovative" for the way it "takes a familiar concept and develops it into a full-fledged game". Other critics were much harsher, criticizing the premise entirely. Overall, it received an aggregated score of 60% from eight reviews at Metacritic.