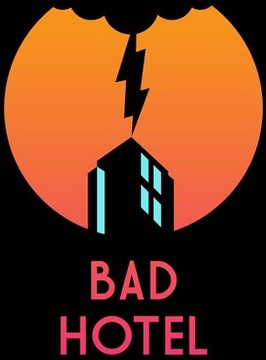 Bad Hotel is a tower defense video game developed and published by Lucky Frame. It was released on August 14, 2012 for iOS and on October 16, 2013 for Windows, Mac OS X and Linux.

The game received positive reviews from critics, who cited its quirky musical and visual aesthetic.

The player is put in charge of defending a small hotel, as enemies go towards it and attempt to destroy it. The player can fend them off by attaching rooms to their hotel, which contain gun turrets, cannons and mortars, as well as support rooms that can heal or house people for money to fund the player's construction.

The game's artwork and theme is done in an Art Deco manner.

The game's main character is a budding entrepreneur who wants to build a hotel, but a Texas mogul named Tarnation Tadstock wants to drive them out by using an army of monsters such as seagulls, rats and yetis.

Bad Hotel on iOS was well received by critics, with an aggregate score of 83 on Metacritic.

Mark Brown of Pocket Gamer called the game "something special", saying that it was "brimming with style", including its "bold art-deco visuals" and "humorous dialogue". He also called the game "lovingly crafted", and stated that its challenge was "finely-tuned".

However, the game's PC release was panned, with reviewers citing the fact that it was barely changed at all in the transition from iOS to PC, resulting in the lack of some features typical to the PC platform such as widescreen support.