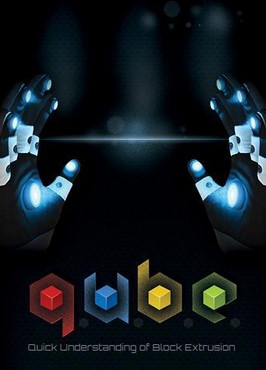 Q.U.B.E. (derived from the word Quick Understanding of Block Extrusion) is a physics-based puzzle video game developed and published by Toxic Games, with help from Indie Fund, a group of independent game developers. The game, an expansion of a student project by the founding members of Toxic Games, was released for Microsoft Windows through a number of digital distribution platforms, first through Desura on 17 December 2011 and then through Steam on 6 January 2012. An OS X port was later released on 17 December 2012 through Steam and on 18 December 2012 through Desura.

In the game, the player guides their avatar through a series of levels to make their way to an exit. The player character is equipped with special gloves that can perform a number of functions on specific blocks to reach the exit. The game employs a sterile monochromatic environment that highlights the coloured blocks that the player can interact with, and has been compared to the Portal series.

The player's character, after waking up from some incident, finds himself with a pair of gloves that can interact with specific blocks that are in the walls, floors, and ceilings of the various rooms as he progresses. The function of the blocks are distinguished by colour: red blocks can be extended or retracted; yellow blocks, always in groups of three, can be used to make stair-like structures; blue blocks can be retracted to act like a springboard to whatever touches them; purple blocks provide means to rotate sections of walls of a room; and green blocks provide a sphere or cube, which the player will need to manipulate. In the early stages, the player's goal is to use a combination of these blocks to get themselves to an exit point, allowing them to move to the next chamber.

As the player progresses deeper into the unknown complex, new puzzle aspects are introduced. In one stage, the bulk of the chambers are dark except for specific coloured blocks, requiring the player to remember the location of other blocks as they manipulate them. Another section features light-oriented puzzles, with the player using cubes and other features to orient the light beam in the correct fashion.

Q.U.B.E. was one of the twelve finalists, but did not win, for the 2011 Indie Game Challenge sponsored by the Academy of Interactive Arts & Sciences.

The game received an aggregated score of 69/100 on Metacritic, indicating mixed or average reviews. Reviewers noted that the game was immediately comparable to the two Portal games, providing puzzles within a sterile environment. The game was praised for building on similar puzzle mechanics while introducing its own ideas. Puzzles involving magnetism, however, were found to be rather tedious compared to the other puzzle elements. The presentation of the new gameplay elements was considered to be well-done, providing a gentle introduction for each before culminating into a larger puzzle. At the same time, reviewers noted that the game lacked any of the personality in story or atmosphere that Portal provided, leaving the player's experience lacking and providing no goal for the player to continue towards beyond seeing what the next puzzle may be. Reviews also noted that the physics of some of the objects like balls and blocks were strange to the point of being manipulated by the game to assure completion of certain puzzles instead of allowing for unlucky bounces that would happen in real life.